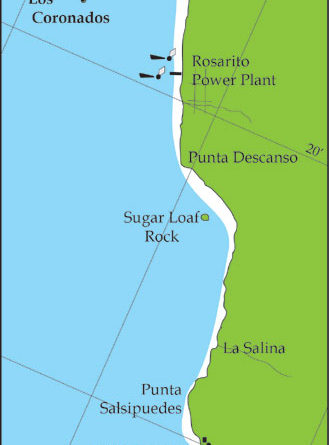 ENSENADA – A new desalinization plant south of Ensenada has just started construction, and although it’s not slated to be completed until 2016, a spokesman for the port captain’s office said any new hazards to recreational boaters will be marked with lighted buoys.

Enrique Ruelas, head of the Baja California Water Commission, said that workers started site preparation in August. The new plant is located south of Ensenada’s urban area, according to the Union Tribune in San Diego.

Ensenada’s reverse osmosis desalinization plant will cost about $46 million, and will produce 5.7 million gallons of potable water daily, supplying about 96,000 people in the port city. Still, it will be much smaller than the desalinization plant nearing completion at Carlsbad, located about 100 nautical miles up the coast. Lighted buoys already mark the Carlsbad plant’s small underwater intake and outflow pipes, and the location is already noted on the latest NOAA charts.

Of Baja’s five municipalities, Ensenada is the only one that does not yet receive water from the Colorado River that eventually flows into the upper Sea of Cortez. As drought in the West continues, Ensenada’s long-term plan may include expanding the desalination plant; under its current design, the capacity could be doubled.