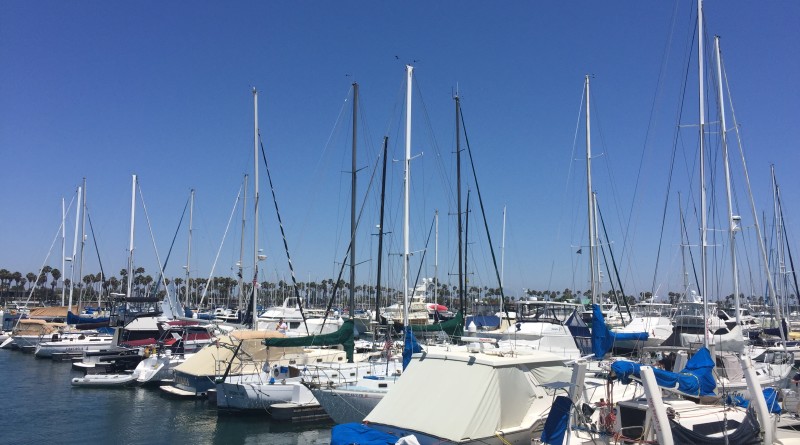 Boat owners searching for a new location to slip their vessel may soon have the option of renting a place in the newly rebuilt Alamitos Bay Marina in Long Beach. There are currently vacancies in the 30- to 50-foot range.Parimal M. Rohit photo

City officials anticipate the recreational boating marina to be completely rebuilt by March 2018. Work on Basin 2 was completed on April 29, with 515 new concrete slips installed. Basin 3 is currently the main focus of redevelopment work. Docks 15 to 19 could be completed within the next few weeks.

In October the city plans to begin work on Basin 7 and the rest of Basin 3. Work on Basin 6 would begin in 2017.

“This will allow the city to consolidate the deployment of dredging equipment, maximizing our resources,” Elvira Hallinan told The Log of the project’s current progress. “Basin 7 with 20 slips should be under construction from November through March 2017. Basin 6 with 88 new concrete slips is scheduled for reconstruction in the fall of 2017.”

Hallinan added Long Beach is also working on building 100 dry slips within the marina, in addition to work on the in-water slips.

Accommodations are being made for boaters who are currently in basins where work is about to begin. However Long Beach is finally in a position to also welcome new boaters into upgraded slips, Hallinan said.

“Because the city made the commitment to guarantee current boat owners a slip during and after construction, the city held various slips vacant to accommodate the vessel shuffle associated with each reconstruction phase,” said Hallinan. “However, as the project progresses, for the first time in several years, Long Beach marinas find themselves with the ability to welcome new customers.

“At present Alamitos Bay Marina has vacancies for slips ranging from 30 to 50 feet. We have implemented a marketing campaign,” she continued.

Work on Alamitos Bay Marina’s rebuild began in September 2011 and has continued in phases ever since. Once completed the rebuilt marina would have 1,655 slips accommodating vessels between 15 and 115 feet in size.

All wooden docks were (or will be) demolished and replaced with concrete docks.

Long Beach rebuilt basins 1, 4 and 5 between 2012 and 2014. The city received a series of loans and cash reserves from the state’s Division of Boating and Waterways (DBW). Another $10.9 million from the Tidelands Operating Fund was redirected to the rebuild project in 2014.

Last year the city sold off a series of Marina Revenue Bonds for a little more than $114 million, allowing Long Beach to pay off the DBW loans and still have about $49 million available to pay for rebuilding basins 2, 3, 6 and 7.

Hallinan said the city has received positive feedback and boaters are being properly accommodated during construction.

“Customer feedback has been extremely positive,” reported Hallinan. “Boat owners are requesting to be relocated in what we call Gangway Communities during reconstruction.  All in all everyone is happy.”