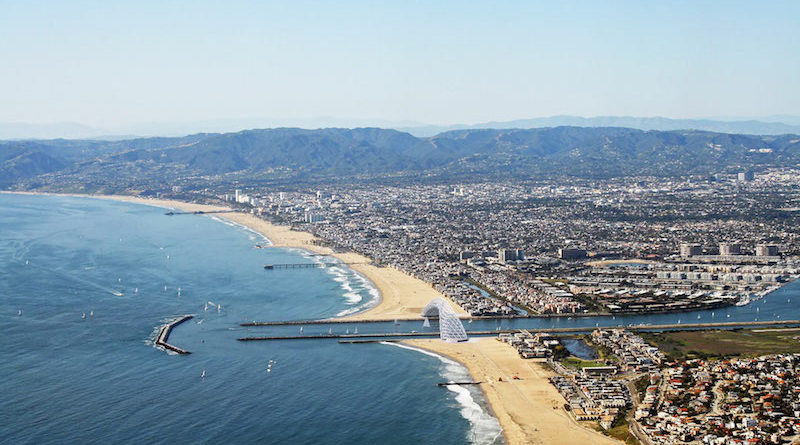 Pedestrian walkway and bicycle path would trek over harbor entrance.

MARINA DEL REY—Boaters going in and out of Marina del Rey might soon have a bridge to navigate under, as an architectural firm plans to build a pathway structure across the channel at ocean’s edge.

Abramson Teiger Architects released renderings of what the white spiral-themed pedestrian and bicycle bridge, would look like – and the first look of the firm’s plans indicate boaters would easily be able to navigate under the massive structure. The bridge would be at the outer edge of Marina del Rey, where the harbor meets Santa Monica Bay and the Pacific Ocean.

Both ends of the bridge meet on a beach and near waterfront housing.

The architectural firm, on its website, explained the bridge would allow a broken pathway to be made whole.

“The Harbor in Los Angeles’ Marina del Rey is the largest man-made small craft harbor in the world, which is a valuable resource if you are a boater. Unfortunately for a cyclist or pedestrian, the Marina breaks the existing pathway connecting the North and South route,” the firm stated on its website.

“Cyclists and pedestrians who want to experience the Los Angeles urban coastline must make a lengthy detour around the Marina, hindering the quintessential LA experience of cycling or walking along the Santa Monica Bay. To solve this problem, we are proposing a new pedestrian and bike path that bridges over the harbor entrance,” the firm continued.

The project team would consist of Trevor Abramson and Michael Lindell.

No other details were immediately available as to when it would be completed or how much the bridge would cost to build.

News reports indicate the civic process on the bridge is currently nonexistent – the published renderings are merely a discussion starter on behalf of Abramson Teiger Architects.