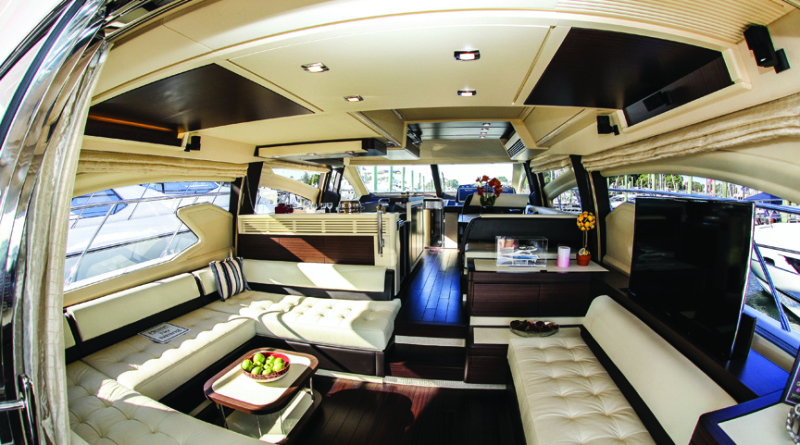 STATEWIDE — It has become easier for tourists to bypass the high priced and densely populated hotels in popular Southern California seaside cities with the recent emergence of airbnbs. A quick perusal of rentals available on airbnb.com shows dozens of boat owners in harbors and marinas soliciting prospective vacationers onto a private boat for a brief getaway.

But is it legal?

There are only a few answers to the debate of whether the marketplace should allow crowd-sourcing to exist in local harbors or government agencies should regulate commercial use of recreational boats.

Using airbnb to convert private boats into vacation rentals could become the boating world’s version of Über. Will some marinas crack down on the commercialization of recreational boats as Santa Barbara Harbor officials did last spring?

In Santa Barbara, a boater had his slip revoked by the city’s Harbor Commission in April after it was discovered his recreational boat was used as a short term vacation rental through airbnb. The harbor department did not allow its slip renters to use the space for commercial purposes. Recreational boats at other harbors in Los Angeles and San Diego, however, are posted as short term vacation rentals on airbnb’s website.

The Santa Barbara Harbor slip renter charged guests to use his vessel as a “boatel” — a portmanteau of boat and hotel — and private charter to nearby islands. Commissioners revoked the boater’s slip renting privileges after the vessel was discovered on airbnb.com as a short term vacation rental and ocean charter.

Prospective renters were charged $85 per night or $800 per week to use the boat as a boatel.

“It seems to have helped calm interest,” Kronman said of how the commission’s decision a few months ago directly reduced the number of vacationers interested in visiting Santa Barbara to rent a boat.

Avalon Harbormaster Brian Bray said there are no official businesses offering boats as vacation rentals at Catalina Island’s only municipality. Boats offered as rentals on Airbnb would be considered a business in Avalon. Boaters must obtain a city-approved permit to conduct any commercial activity on the water.

“There is not an Avalon-based business offering this service,” Bray said. “If someone wanted to do this type of business they would need to fill out a Waterside Permit Application which would be heard before the City Council in December (once a year) when new waterside permits are presented to them for consideration.”

Interestingly enough, a quick perusal of rentals available on airbnb.com show dozens of boat owners in other harbors or marinas soliciting prospective vacationers onto a private boat for a brief getaway.

One posting advertises a sailboat available in Newport Beach for $85 per night. The posting’s headline reads, “Ever sleep aboard a sailboat?” and describes the boat’s location as on the water and walking distance to restaurants and shops.

The city of Newport Beach does not seem to have a clear policy on whether recreational boats can be rented out as a vacation rental. Newport Beach’s Harbor Code section 17.10.020 states a boater needs a permit to conduct any commercial activity in Newport Harbor.

“No person shall engage in, or conduct, any commercial activity on Newport Harbor, unless that person has obtained a permit for such activity,” the code section states, adding bareboat or certificated charters without a marine activities permit are prohibited.

However, Section 17.10.025 of the code offers permit exemptions for sportfishing and commercial fishing vessels, single vessel charters for up to six people, special events, film productions, business operations approved by the city, activities endorsed by the Army Corps of Engineers and private marinas with a commercial pier.

Is offering a boat as vacation rental on airbnb.com a commercial activity or an exempted single vessel charter use? The city’s harbor department was unable to offer a definite answer either way. Whether the city would soon provide any clarity or develop a policy to determine the legality of boaters offering their respective vessels as a vacation rental remains to be seen.

Nightly rates in Marina del Rey range from $40 for a 25-foot sailboat to $1,000 for two bedrooms aboard a 55-foot yacht. However, Los Angeles County does not allow boaters to use their vessels as vacation rentals.

“This activity is not authorized in our marina,” said Carol Baker, a spokesperson with the county’s Department of Beaches and Harbors. “On docks operated by the county, such as the transient docks at Burton Chace Park and the docks at Anchorage 47, we do not allow anyone to operate an airbnb. When discovered, we tell the vessel owner to immediately cease the activity or leave our premises because they are in violation of their slip rental agreement with us.”

Airbnb activity is also prohibited in any of Marina del Rey’s private marinas.

“In the case of privately run marinas in our harbor, the county works with lessees to stop any unauthorized activity. If a lessee allows such activity to occur, the department may be forced to ask our county counsel to take legal action to stop the activity,” Baker said.

“Like a lot of activity that’s not permitted, it still occurs. We have ongoing enforcement efforts against more traditional unpermitted charter operations, but this airbnb activity usually is not as readily apparent,” Baker said.

Meanwhile, an airbnb user in San Diego offered his sailboat to ComicCon attendees for $200 per night.

“This is a magical place to call home for a day or a lifetime. Nestled on the water (literally) in Mission Bay is my 28 foot Columbia sailboat. It features two places to sleep, a full galley, outside deck, and full bathrooms at the marina,” the host and airbnb user stated in his posting. “The entire boat will be yours to use … as a home, not as a boat per se. Guests are not allowed to take the boat off of the dock and out into the water. This is strictly a living space. Others besides [you] will not be able to come aboard the boat.”

Boaters might also leverage the 2016 Major League Baseball All-Star Game, to be held next July at Petco Park, to offer their sailboat, powerboat or yacht as a short term vacation rental to fans vacationing in the area but unable to find a hotel near the stadium.

A few miles away from Petco Park is Shelter Cove, where one airbnb.com user offered short term vacationers the opportunity to rent one of eight yachts for daily or weekly stays.

This writer recently visited airbnb.com and reached out to Shaun McMahon with a request to rent Czech Mate in San Diego from July 30 to Aug. 1. She replied back with an $856 quote for the two-night stay.

MacMahon also offers the fleet of eight yachts as a “boat and breakfast” at Shelter Cove Marina in San Diego through her website, boatbnb.com. Each boat is offered as an ideal romantic getaway or the perfect hangout. Renters who want to cruise the harbor or charter the vessel would have to hire a licensed captain through boatbnb.com.

Airbnb hosts offering short term rentals within the city of San Diego are now subject to the same transient and occupancy taxes as hotels; the tax officially kicked in on July 15. Short term vacation rentals are prohibited, however, in Coronado, which is home to Glorietta Bay Marina and a mooring field just north of the city’s bridge. Short term vacation rentals are permitted in Solana Beach, a non-boater city just north of San Diego, though the activity is regulated.

The Port of San Diego’s real estate team confirmed airbnb activity is allowed in the bay.

“This type of use is allowed under the boat charter category, provided that there is an approved sublease in place and rent is paid,” Port of San Diego spokesperson Marguerite Elicone said. “In the case of the Shelter Cove Marina, Ms. MacMahon has been paying the appropriate rent and that type of use is included in the Shelter Cove lease.”

Uncertainty certainly rules the day as local and regional government agencies grapple with how best to regulate, if at all, the intermixing of recreational boats with commercial uses.