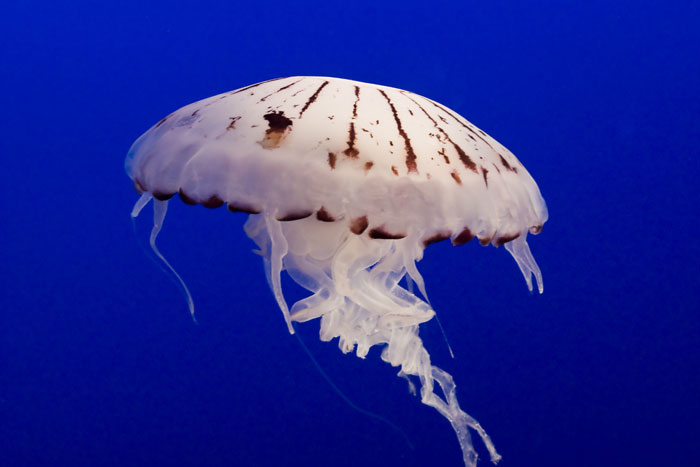 LA JOLLA — Jellyfish seem to have a lot in common with cockroaches, researchers say. It doesn’t matter what condition the rest of the world is in, they will almost always flourish.

In recent years, as the acidity and temperature of the ocean has increased, jellyfish blooms have gotten bigger — and they’re lasting longer. But, does that really mean that their population is heavily increasing?

“One of the problems is, there’s not enough long-term science on jellyfish, or quantitative numbers,” said Vincent Levesque, senior aquarist at Birch Aquarium, at Scripps Institution of Oceanography in La Jolla. “We’ve really only just started studying jellies in the last 100 years and have just touched species in the last 20.”

For a long time, Levesque said, biologists thought all moon jellies were the same species, but now they’re realizing that there are hundreds.

Since jellyfish blooms are erratic — except for box jellies, which bloom eight to 10 days after a full moon — scientists cannot determine when one will happen. But certain factors can control how successful a bloom is.

“There are numerous causes that will make the jellyfish population go up,” Levesque said. “If you remove their predators — the sea turtle, the ocean sunfish and even general fish populations — at the jelly’s larval stage, many types of fish eat them.”

Jellyfish survive where most other things don’t, Levesque said, particularly in places of eutrophication. “There are spots in the world where you have huge amounts of pesticides and fertilizers going into the water, (and) you will see jellyfish surviving,” he said.

Farming runoff is key to this overly high concentration of nutrients. Industrial runoff, however, has the opposite effect, as heavy metals will kill off jellyfish populations.

While jellyfish populations have appeared to slightly increase this year, incidents of jellyfish stings have not. “In the 13 years I’ve been doing this, only one (year) stood out,” Levesque said. “In 2006, all three stinging jellies were present, at once, in San Diego: the purple jelly, the black jelly and the fried egg (yes, it actually looks like an egg cooked sunny side up). ”

What happens if you do get stung? Despite a widely held misconception made popular by an episode of the television show “Friends,” don’t apply urine to the sting. According to Dr. Lisa-Ann Gershwin, author of the book “Stung! On Jellyfish Blooms,” the bodily fluid will only make things worse, aggravating the stingers into releasing more venom.

“Think about this: Right at this moment, is your urine in an acidic or alkaline state? I’m guessing you don’t know,” she said. “If it is acidic, then it will work about 25 percent as effectively as vinegar in neutralizing box jelly and Irukndji stinging cells, whereas if it is alkaline, it will cause them to discharge, which could be life threatening.”

Dr. Gershwin recommends that those stung use something proven to work effectively to neutralize stings: vinegar. While it’s not the perfect neutralizer, activating discharge in some species, Gershwin said, it will inactivate the stinging cells of life-threatening species such as boxies and Irukandjis.

“I should add that there is a misconception that vinegar is supposed to stop the pain of a sting. It does not,” Gershwin said. “It may save a life, which far outweighs pain that will self-resolve in a half-hour anyway.”

According to Levesque, the best thing you can do to relieve a jellyfish sting is immerse the area surrounding the sting in hot water — almost scalding, 110 degrees, hot.

“While other treatments depend on the type of jelly, with 100 percent certainty, hot, hot water will denature the protein,” Levesque said.

“If you’re dealing with a box jellyfish, vinegar is the best to use. For others it’s alcohol,” Levesque said.

Dr. Gershwin noted, however, that while hot water does soothe pain, it causes more envenomation. In particular, freshwater forces discharge and heat dilates capillaries, “So, hot water is the last thing you would want to use to treat stings with potentially lethal consequences.”

Stung boaters should first take a credit card or something of a similar size and scrape the infecting tentacle(s) off and away from them, Levesque added.

Fortunately for Southern Californians, while there are plenty of jellyfish along the West Coast that have a hearty sting, none of them are deadly. The most venomous jellyfish, also known as the most venomous animal in the world — the chironex fleckeri — prefers to hang out in tropical Australia.

“(The label of ‘most venomous’ is) a well-deserved title,” Dr. Gershwin said. The chironex “can knock you dead in two minutes flat. And an average adult animal has enough venom to kill about 60 healthy adults in two minutes.”