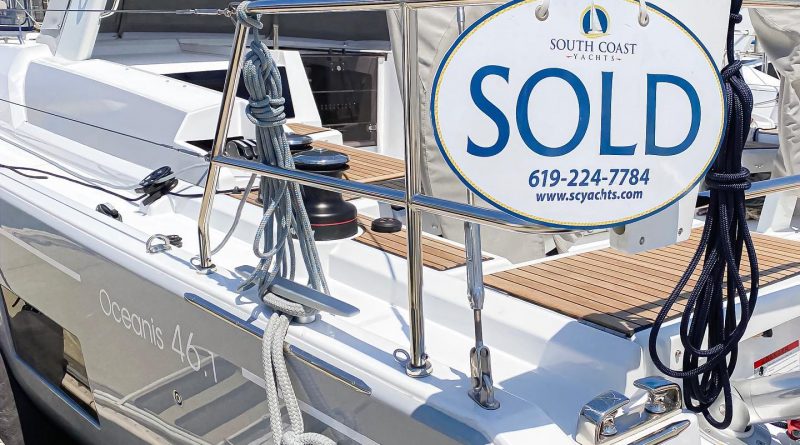 Some Southern California boat dealers and brokers have reported business is good, so good that inventory is low and in some cases, all of their boats are in contracts.

SOUTHERN CALIFORNIA—Many boat buyers spend weeks or months researching and picking out the perfect boat. Steve and Ruth Schock, owners of Schock Boats which has a long-standing location Newport Beach and a new location in Huntington Harbour, said it’s usually a couple weeks before customers are ready to make a purchase on a used boat and months before customers are ready to buy a new boat.

With summer concerts, attending sporting events, backyard barbecues and group activities on a hiatus this summer due to the Coronavirus, boating remains an activity open to Southern Californians and other waterfront communities.

“We had a couple customers tell us, people we had never seen before, this is what they’re going to do now,” Steve said. “They’re not going to go on big expensive vacations.”

Such high interest is leaving some boat dealers with dwindling inventory and many buyers are forgoing the luxury of purchasing the perfect boat to just have something to get out on the water in this summer. Steve said he got that exact call from a customer in Northern California.

“He said what do you have right now that I can buy?” Steve said.

“That is unusual for us,” Ruth followed.

“That’s a first for me,” Steve replied.

Baird, in partnership with Marine Retailers Association of the Americas (MRAA) and Soundings Trade Only, surveyed 103 marine retailers in the US on their current conditions and released the results in a report titled June 2020 Marine Retailer Pulse Report. According to the report, new boat inventory among those retailers was the leanest in the history of the 6-year-old report, with 86 percent of dealers reporting new boat inventory is “too low” versus just 3 percent considering it “too high.” In the used boat sector, 87 percent of dealers reported inventory is “too low” versus just 1 percent responding “too high,” the largest gap recorded in the survey’s history.

“What was happening, and I think the customers were seeing it, the used boats were disappearing,” Steve said. “In the very beginning it was our brokerage and our trades, they just went out the door, it seems like in just two weeks. We blew through all our used boats.”

The business is also trickling down to boat and yacht financial services firms and banks.  Joni Geis of Sterling Associates in San Diego said banks are receiving three to four times the volume of boat loan applications that is normal for this time of year.

“We’re joking around that there have to be no more boats for sale in California,” Geis said.

With banks overwhelmed with processing loan applications, it is taking longer for the approval process.

“One of the downsides to the banks taking this amount of time to get through the underwriting process is that the finance deals become less attractive to brokers and sellers than the cash deals,” Geis said.

She said the underwriting process to determine if a customer qualifies or not has not changed and customers who qualify are still able to get loans.

“The underwriting is exactly the same,” Geis said. “It’s just that because you’re getting three to four times the volume your approval rate drops down because not everybody can qualify for a boat loan.”

The National Marine Manufacturers Association (NMMA) reported a new record for new boat sales was set in May. According to NMMA, new boat sales rebounded by 59 percent in May from April, and were up 9 percent from pre-pandemic levels on a seasonally-adjusted basis.

The Schocks said business for them has been booming the past few months.

“We are definitely in danger of running out of boats,” Steve said in early July.

During the early July conversation, the Schocks said they were completely out of used boats and were running low on new boats.

“We were prepared to be all doom and gloom and it’s been exciting,” Ruth said.

They said customers have been everyone from first-time buyers, new boaters and experienced boaters trading in or looking for another boat. Steve said people were coming in ready to buy a boat that day.

“They usually spend a month picking out the right boat and all the accessories and options and you know that’s a big process, right now they’re like no, what do you have? I want to get on the water,” Steve said.

According to the June 2020 Marine Retailer Pulse Report from Baird, 89 percent of boat dealers experienced retail growth in June, up from 70 percent in May, the highest in the survey’s history. Used boat retail also reported growth, with 84 percent reporting retail growth in June. The Pulse Report noted June typically represents about 15 percent of annual retail sales.

The Log spoke with Barrett Canfield, President of South Coast Yachts San Diego and Newport Beach, back in April, who said inquiries were light but predicted “all this time surfing YouTube boating videos at home will create a pent up demand to get out on the water.”

Canfield said not only has business been booming since May, they are actively hiring new people to help handle the demand.

“The biggest surprise to us and everyone I’ve spoken to in the boating industry is the incredible surge in boat sales in the last two months,” Canfield said in an email. “We never expected this, but we are surely happy that we are busy serving our customers with new and brokerage boats in a very active market.”

He said the months of March and April were slow, but monthly sales on new boats for the months of May and June were up 45 percent over those months in 2019 and brokerage was up 26 percent from 2019. He said about 10 percent of buyers so far this year are new boaters.

“We believe we are on par for an excellent 2020 in boat sales for both new and Brokerage,” Canfield said in an email.