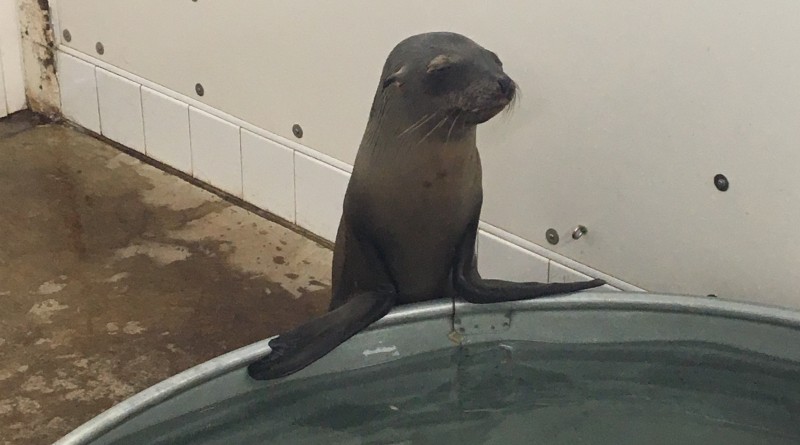 NEWPORT BEACH ― A young sea lion was rescued by the Coast Guard off Newport Harbor after the pup swam near the boat appearing in distress.

The small sea lion had a fishing line caught in his mouth and jumped aboard the Coast Guard vessel for help. It took some convincing to get the pup to hop on board. Once on the boat, the sea lion posed for pictures. The Coast Guard named him Whiskers.

News reports indicated the sea lion pup was happy to be separated from the fishing line.

Pacific Marine Mammal Center (PMMC) was called to transport the young sea lion to their center to recover.

The sea lion, called Whiskers, was brought to PMMC’s facility in Laguna Beach. Whiskers is severely malnourished and dehydrated weighing in at 24 pounds, according to PMMC Public Relations Coordinator Krysta Higuchi.

“The animal is still very weak and considered critical,” Higuchi told The Log. He is approximately six months old and male.

The rescued sea lion will be recovering at the center in Laguna Beach for at least a couple months.

“The average stay for a recovery is two to four months,” Higuchi said.

PMMC is a non-profit organization where marine mammals are rehabilitated and then released back into their natural habitat. The sanctuary is open to the public daily from 10 a.m. to 4 p.m. Admission is free but donations are appreciated.