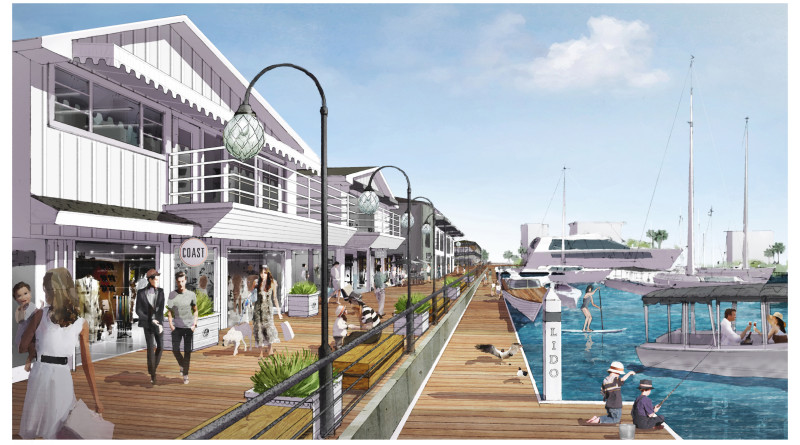 DJM Capital plans to revamp the dilapidated Lido Marina Village with a new marina, upscale restaurants and retail stores. The first phase of the project is on schedule to be completed by the end of July.DJM Capital courtesy photo

Newport Beach project would revitalize high-traffic area of the harbor.

NEWPORT BEACH — A dilapidated corner of Newport Beach is finally undergoing a facelift as the Lido Marina Village revitalization project is underway. The project’s first phase is on pace to be completed by the end of this month.

A firm representing DJM Capital said the redevelopment project would feature a reconfigured marina to accommodate small and large boats, dinghies and kayaks. Shops, restaurants and creative office space will also be featured at the new Lido Marina Village.

“The new marina will [have] 48 slips,” Carrie Williams, a spokesperson for DJM Capital and the Lido Marina Village project, told The Log. “The first phase of the marina will be to move the charter boats and will be completed this month.”

Williams said the project hopes to gain California Coastal Commission’s approval of the second phase shortly and have the rest of the marina completed by late 2017 or early 2018.

The project’s second phase, if approved in its current form, would provide additional boater amenities.

“In the second phase, we will be accommodating small boats 35-45 feet in length, kayaks, dinghies, transient sideties, and larger vessels 35 feet to 82 feet in length. It will also include a low freeboard dock for easy launching of kayaks. The transient dock sideties will limit time to about an hour,” said Williams. “The small boats and larger vessels are month-to-month (or longer depending on the boats) leases.

“We will be extending the boardwalk 6 feet and that will be built with the second phase marina,” she continued.

Some tenants ready to fill Lido Marina Village once it opens include Nobu Restaurant, Elyse Walker and Planet Blue, among others.

DJM is headquartered in San Jose and recently completed the Pacific City project on Pacific Coast Highway in Huntington Beach.