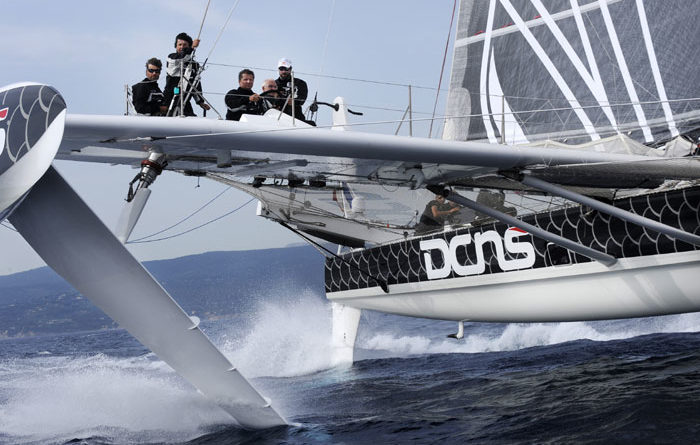 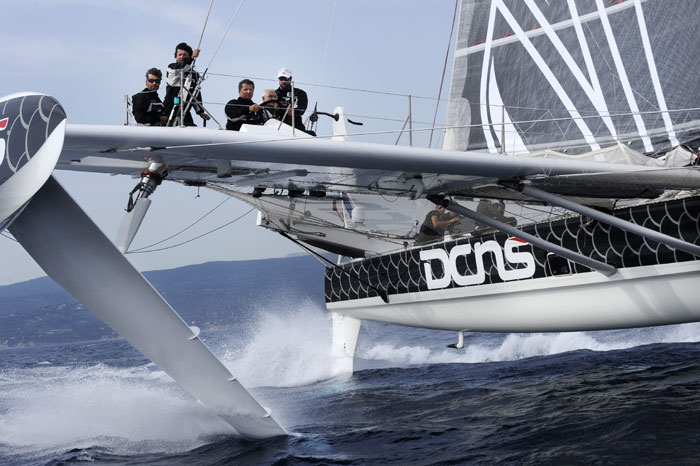 LONG BEACH — With Frenchman Alain Thebault’s 59-foot “flying sailboat” arriving in San Pedro July 3, the stage was set for the famed hydrofoil trimaran to take its run at a transpacific sailing speed record.

The long-distance speed record attempt from Los Angeles to Honolulu is one of the first for a foil-design sailboat, but Thebault’s l’Hydroptere DCNS is not just any foiler.

As the current nautical-mile speed record holder — covering 1 nautical mile at a speed of 50.17 knots — l’Hydroptere has spent most of its 18 years in the Mediterranean, speeding across short distances in calmer waters. But Thebault has more to prove for his creation: He is looking to conquer the rough and unpredictable Pacific Ocean, while showing the world that hydrofoil sailboats are capable of setting offshore records.

Since his childhood, Thebault has dreamed of mixing flying and sailing in one pursuit. After presenting his first drawings of a multihull on hydrofoils to fellow French yachtsman Eric Tabarly, the two worked together to create l’Hydroptere.

“It took Alain almost 30 years to conceive, build and upgrade l’Hydroptere to what you see today,” said l’Hydroptere team member Thomas Lesage. Through the years, a team of engineers from French companies such as DCNS (the boat’s main sponsor), Airbus, Dessault Systemes and EADS helped design a special sailboat. l’Hydroptere’s unique features include in-water foils at 45 degree angles that lift the boat out of the water at 10 knots. With the right wind, “This boat is 50 percent an aircraft and 50 percent a ship,” Lessage said.

The boat, completed in 1994, began its tumultuous journey with a series of mishaps, capsizes and conundrums for the team — before a breakout in 2005 led to an English Channel crossing record. That success was followed in 2008, when the boat reached a breathtaking top speed of 52.86 knots; and in 2009, when l’Hydroptere took the short-distance nautical speed record: covering just over 500 meters at a speed of 51.36 knots.

While kitesurfers have recently reclaimed the 500-meter record, l’Hydroptere’s nautical-mile speed record still stands — and Thebault is anxious to see what the craft is capable of in the open ocean.

“The record won’t be easy,” Lesage said. “It’s Hercules versus Goliath! But, of course, if we set an attempt, it is with the belief we can do it. On our route planning, we are faster. The only difficulty is going to be the boat’s behavior in oceanic seas.”

To combat the smaller boat’s susceptibility to ocean swell, French naval defense company DCNS has developed a revolutionary system to control the boat’s pitch, and that could end up increasing the vessel’s speed by 10 percent.

“The entire crew’s been working on this for almost a year, to adjust the boat for Pacific conditions,” Lesage said. “But the attempt is also the accomplishment of many years of research and development.”

For l’Hydroptere to overtake the record, the crew will have to maintain an average speed faster than 19.7 knots to beat Geronimo’s record on the 2,215-nautical-mile trek.

After arriving via cargo ship July 3 — following a month-long trip from Toulon, France — l’Hydroptere was reassembled and given final modifications for oceangoing sailing at Cabrillo Way Marina. The boat was back in the water July 16, and is ready to set sail on the record attempt, as soon as the crew finds a weather window to their liking.

“The idea is to use thermal wind at the beginning to leave the Los Angeles area,” Lesage said. “And we also need a favorable weather system and northeast winds, so that our route toward Honolulu will be fast and with consistent speeds.”

The crew expects the run to commence between July 20 and Aug. 5. The official route starts off the Point Fermin lighthouse, with the finish line located in alignment with the Diamond Head lighthouse at Waikiki Bay.

“I am particularly pleased to be able to tackle this first record of the oceanic Pacific crossing with the Hydrofoil DCNS,” Thebault said in a statement. “After these long months of preparation and work, this is a great reward for the team and DCNS, and for all those who support us. Now, we can prove what are the capabilities of l’Hydroptere DCNS.”