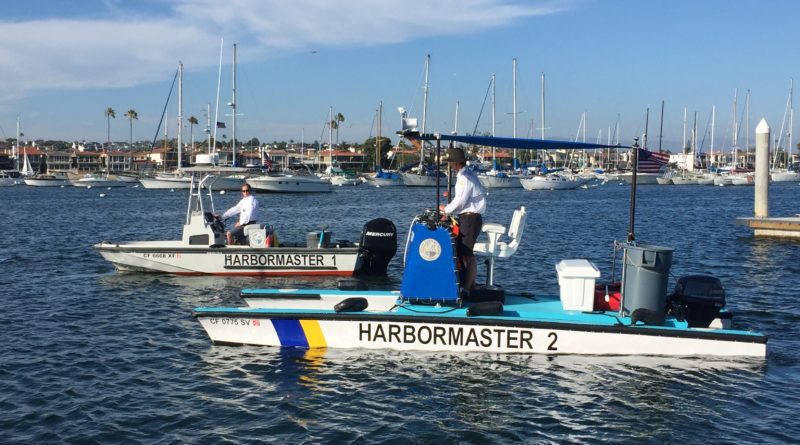 NEWPORT BEACH — The mooring management and harbor operations shift from Orange County Sheriff’s Department to the city of Newport Beach has been a fairly smooth transition as Harbormaster Dennis Durgan assumes his role.

The amount of foot traffic coming into Marina Park, where Durgan’s office is located, after the operational shift in management was unexpected.

Durgan, who is an avid sailor, real estate agent and Newport Beach resident, said the city received about 150 applications for part-time harbor work. The pool of applicants was narrowed down to 30 and then the final 13 were selected.

He added his department now has three harbormaster vessels as well to help him and his team manage the harbor and keep the water clean of trash.

The city’s 19-foot Whaler has been refurbished and now has a chartplotter and radar, Durgan mentioned, which will be especially useful in the fog.

“We leased two older catamarans,” Durgan also mentioned. “We’ve got little hoses with little pumps, so we can squirt sea lions when they come up on a boat or dock. It’s working great. “We put a pool net on each one of the boats and we have a regular trash can, so as we cruise around the bay and [scoop up trash floating in the water],” Durgan continued. “We’ve filled 25 trash cans so far.”

Durgan and his team have driven these three vessels through all the mooring fields in Newport Beach harbor taking photographs and noting the condition of the mooring lines as well as the boats.

“It’s going to be really helpful to have all that data on who the mooring permitee is and what boat is suppose to be on there,” Durgan said. “Everything about each mooring is going to be at our fingertips.”

Durgan and his team, in addition to managing moorings and picking up litter, are also focusing on safety in the harbor.

Durgan said they are concentrating on having no wake in the harbor, especially since there are so many standup paddleboarders out there.

“We’re ambassadors trying to teach good boating so everybody has fun out there,” Durgan stated.

Durgan and his team are also educating both the renters and the private owners of standup paddleboards.

“You’re supposed to have a Coast Guard approved floatation device on your paddleboard, [and] if you’re 13 and under, you’re supposed to be wearing that life jacket.” Durgan pointed out. “I would say there’s probably 30 percent that don’t have it on their boards.”

A popular but risky activity among young people and children is a growing concern for Durgan and his team.

“One of the big concerns we have right now are all the kids jumping off the bridge mainly at Lido Isle, which is a very dangerous practice.” Durgan said. “Now we are directing traffic under the bridge. We’re figuring out how to address it. It’s going to continue to be a problem.”

The harbormaster, however, said he has been working more than a 40-hour workweek as he gets his department up and running.

“I’m trying to keep to 40 [hours per week], but it’s been over,” Durgan said. “You would with any start-up company.

“I’ve been a sailor almost all my life, so it’s like putting together a big race boat team,” Durgan continued.