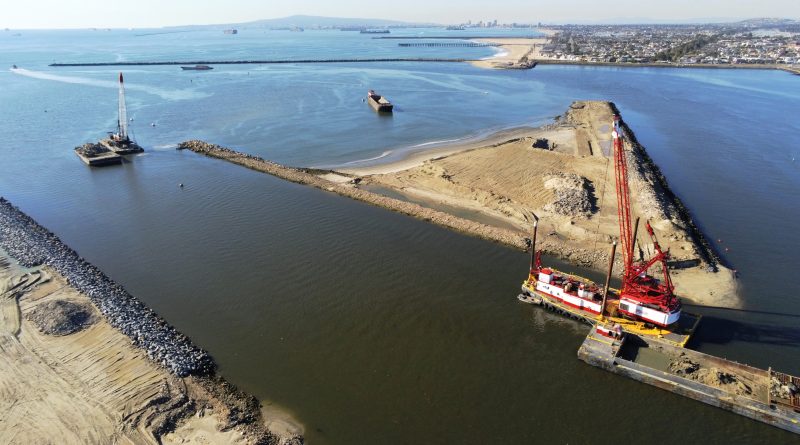 SEAL BEACH—Boaters navigating between the ocean and Huntington Harbour have a new route to follow, which will separate them from Naval vessel traffic and provide a more direct route. The Naval Weapons Station Seal Beach opened a new small craft channel in Anaheim Bay on Jan. 21. The new channel separates Navy traffic from civilian boat traffic. The old channel previously shared by the two is now closed to the public but work on armoring the sides of the new channel will continue for several more months.

“There’s been a longstanding concern on part of the Navy that it’s not optimal to have civilian small boats transiting right next to a location where Navy ships are operating,” Smith said.

The new channel is approximately 1,200 feet long and 200 feet wide, making it approximately 25% wider than the old channel. Smith said the new channel will also result less time boaters are restricted from using the entrance. The bay has been closed off to boaters anywhere from 45 minutes to a couple hours any time a navy ship came into or out of port.

“With the new channel in place we should eventually be able to significantly cut back on the amount of time that the public channel is closed whenever ships are coming and going,” Smith said.

The Naval Weapons Station Seal Beach was working with the U.S. Coast Guard to get new navigation aids installed to guide boaters in the new channel. He said those were expected to be in place when the channel opened.

The civilian channel is one of the first phases of a larger five-year project, which began in December 2019. The project also includes the construction of a 1,100-foot-long replacement ammunition pier at the Naval Weapons Station Seal Beach, which will enable larger ships to safely enter Anaheim Bay for loading and unloading.

“It’s basically about to run out of its design life and so we have a need for a replacement ammunition pier,” Smith said.

Since Naval Weapons Station Seal Beach is the only naval weapons station within 1,000 miles of the fleet concentration in San Diego, the pier needed to remain operational during construction to continue supporting the fleet. A new ammunition wharf will be built closer to the center of the harbor.

The new pier will be larger, built to the latest standards and have the ability to simultaneously dock two medium ships or one large ship.

The old channel will become part of the Naval Weapons Station Seal Beach restricted area and is now serving as a construction zone for this next phase of the overall project.

“We wanted to ensure that civilian boats always had access to Huntington Harbour so we built the small craft channel first and then we’ll be doing other parts of the project in the coming months and years,” Smith said.