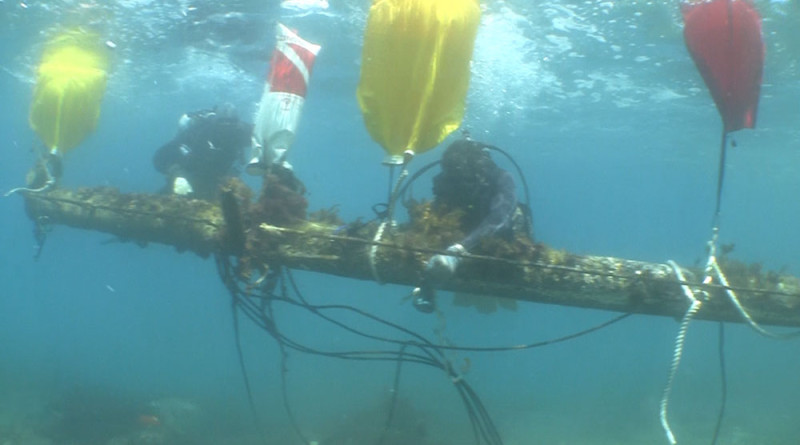 CATALINA ISLAND – The mast of a 60-foot sailboat that went down in Avalon Harbor after breaking free from its mooring in 2011 was floated to the top of the water after an extensive haul-out by Ocean Defenders Alliance volunteers on July 26.

The mast of the vessel, Godspeed, had come to rest in Lover’s Cove after the vessel drifted and sunk in shallow water in 2011. Lover’s Cove, a popular snorkeling and scuba diving spot, was designated one of the 119 Marine Protected Areas (MPA) in 2013. Ocean Defenders Alliance (ODA), an organization working to protect marine ecosystems through meaningful action, was granted permits by the California Department of Fish & Wildlife to go into most Southern California MPAs to remove manmade debris that is harming or killing wildlife.

The removal of Godspeed has been on the group’s radar from some time so when a window of opportunity opened up to help clear out the debris, ODA took it.

Godspeed went down in one piece but has broken into several parts through the years. According to ODA Founder Kurt Lieber, large pieces of debris were scattered over an area approximately 30 yards by 50 yards in 2013 but the field of debris is now much larger, and the pieces have been broken into smaller fragments.

Only the mast was intact.

“Because it was a cement hull it kept beating against rocks and broke up into tiny pieces,” said Lieber, president of ODA who described a debris field littered with cushions, batteries, and other items around Lover’s Cove. “It’s [the mast] been beating up the area.”

Six ODA volunteer divers and six crew members headed out of San Pedro to Lover’s Cove on Mr. Barkers LegaSea early July 26 and quickly set to work once on site.

ODA divers located the steel mast in 10 to 20 feet of water and began to attach lift bags. After about an hour of work, the bags did not lift the 48-foot long, 1,200 pound mast.

On the second attempt, the team added more lift bags and used cable cutters to cut the steel cables that served as the boat’s rigging. Within 15 minutes the mast was floated to the surface by 15 lift bags. Godspeed’s pulpit was also lifted and hauled to the city’s crane.

Both the mast and pulpit will be shipped to the mainland for recycling.

As the mast was lifted from the water, ODA received thanks from the semi-submersible submarine captains whose clients often saw the mast underwater, Lieber said.

ODA plans to head to Oxnard to remove traps and nets from an MPA in the area.