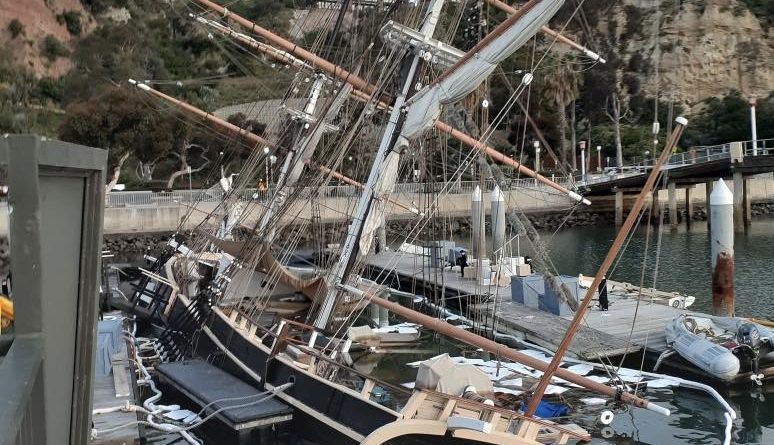 'Pilgrim' keeled over in its slip on March 29. Ocean Institute Photo

Demolition was the only safe option available, according to Ocean Institute and other agencies involved with the recovery process.

DANA POINT—Pilgrim, the brig and tall ship once docked at Dana Point Harbor, will be demolished, The Log confirmed in an email correspondence with the Ocean Institute.

The tall ship became submerged underwater, while in its slip, on March 29. The cause of Pilgrim’s sinking has not yet been determined.

Wendy Marshall, the Ocean Institute’s president of education and operations, said the decision to demolish Pilgrim was based on safety and jointly made in conjunction with several agencies involved with the tall ship’s recovery.

“One aspect that is important to note is that all of the plans, steps, decisions, and work (including the order to demolish the vessel) were made by the agencies involved with the recovery process along with the USCG,” Marshall told The Log. “Safety was the number one priority and we respect that a demolition was deemed the only safe option for the teams who working on this recovery as well as the only option given the status of the boat.”

News reports indicated the decision was made to demolish Pilgrim during efforts to salvage the tall ship, which was docked at a slip adjacent to the Ocean Institute.

Salvage efforts were coordinated by the Pilgrim crew, O.C. Sheriff’s Department, U.S. Coast Guard and Tow Boat US, according to news reports.

Coast Guard officials reportedly halted salvage efforts on April 2; it was determined the salvage wasn’t safe for the diving crew involved, according to a news report published by the Orange County Register.

Ocean Institute regularly provided updates of Pilgrim’s salvage on its Facebook page. An update on April 7 stated the salvage crew was “not able to lift the vessel out of the water.”

“Unfortunately, we’re unable to lift the vessel out of the water,” Dan Goldbacher, the Ocean Institute’s director of maritime programs, said in a Facebook video on April 7. “The vessel meant a lot to a lot of people.”

Pilgrim had been a major draw for visitors and students. It served as a living classroom, offering a variety of history programs to thousands of students each year.

The original Pilgrim was built in 1825 and made visits to Dana Point. A replica of the tall ship was built in 1945, originally as a schooner. It was later converted to a brig in 1975; the conversion took place in Lisbon, Portugal.

Pilgrim, the replica, arrived at Dana Point Harbor in 1981 and has been part of the Ocean Institute’s stewardship for almost 40 years.

Marshall added the Ocean Institute has been overwhelmed with community support since the day Pilgrim went under water.

“We have been flooded with memories, images, ideas for the next chapter, plans, etc.,” Marshall said.

Ocean Institute staff stated they would update the public once future plans have been determined. Some have suggested a new Pilgrim be built.

Everyone who has interacted with Pilgrim at some point has been requested to submit their stories and photos of the brig to the Ocean Institute. Photos and stories can be sent to the Ocean Institute via email (marketing@oceaninstitute.org) or social media (Twitter or Facebook) with the hashtag #thebrigpilgrim.

3 thoughts on “Pilgrim set to be demolished”