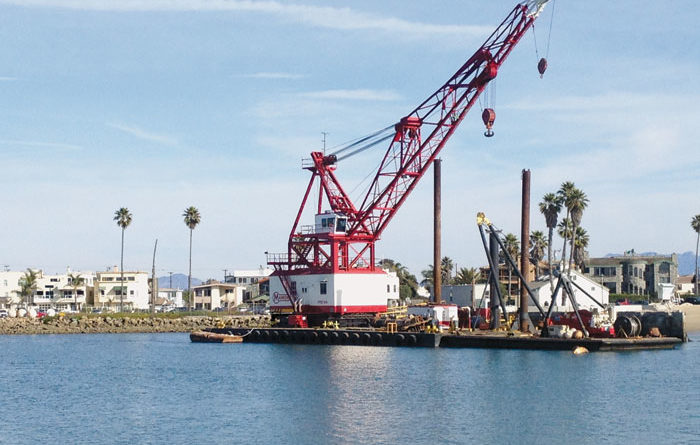 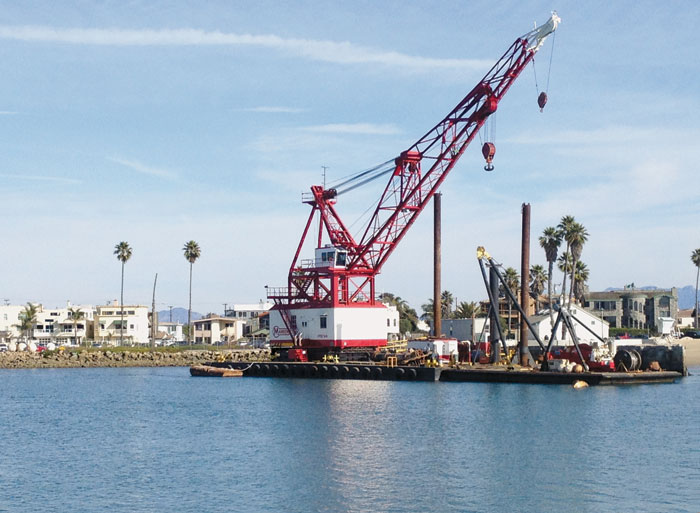 CHANNEL ISLANDS HARBOR — Dredging began Jan. 4 in the entrance channel here, and it is scheduled to be completed on Feb. 10. However, according to Harbormaster Jack Peveler, the full amount of dredging needed at Channel Islands Harbor will not be completed this year — once again — because of inadequate federal funding.

“The total amount of material to be dredged this year will not exceed 700,000 cubic yards,” Peveler said. “Funding levels for all harbors have been reduced over the past few years, and it does not appear anything will be changing in the foreseeable future.”

Each year, each qualifying federally maintained harbor or port is authorized to have a set amount of material removed by dredging, by the Army Corps of Engineers. For Channel Islands Harbor, that amount should be approximately 2 million cubic yards of dredging every other year, Peveler said. However, because of the reduced funding the Corps of Engineers receives, it has not been able to dredge that amount of material for several years.

“This is an additive problem over time,” Peveler explained. “We now have over 3.3 million cubic yards of material waiting to be dredged.

“This year, the Corps will remove material from the entrance channel and the area in front of the harbor entrance known as Area B,” he said. The area on the north side of the detached breakwater, which is considered a sand trap and is not the main entrance to the harbor, will not be dredged this year. Instead, the Harbor Patrol will leave shoal buoys in place to warn boaters of the existing hazard.

“There is a real potential of actually closing off the north area of the breakwater to vessel traffic due to severe shoaling,” Peveler said. The funding the Corps has received for this reduced project is about $4.5 million.

“A survey conducted in July 2012 identified a total of 3.15 million yards of material to remove,” Peveler said. “Cost per yard is adjusted depending on the volume to be dredged. Current pricing is $6.50 per yard to dredge the remaining material of about 2.5 million cubic yards, at a cost upwards of $16.5 million.”

According to Channel Islands Harbor director Lyn Krieger, the harbor funding was included in President Obama’s budget. However, the harbor has not received enough funding for full clearing of the sand trap for several years — and Krieger said she expects it to be an ongoing issue.

“The harbor staff is diligent about getting and keeping buoys in place when shoaling happens, and no major boater-related problems have occurred, as yet,” Krieger said. “Dredge funding is a constant struggle for the Corps — and it is affecting all harbors.”

Funding is also needed to repair Channel Islands Harbor’s breakwater, which is slumping at the north end, where the navigation marker and light is leaning — seemingly precariously — at a sharp angle. The angle of lean has increased over the past several years.

“The breakwater, unlike most in the state of California, has not required anything in the way of repairs since its construction in the 1960s — just some minor maintenance,” Krieger said. “While the slumping of the breakwater at the signal light has been noted for a few years, we have been unable to get funding for the repair through the Army Corps of Engineers (through Congress).

“We keep trying,” Krieger added. “We haven’t (yet) received complaints from boaters about the light, but it would be far better to have it repaired.”

According to Peveler, fixing the breakwater that serves as a wave barrier for the harbor entrance and its navigation light could cost as much as $5 million, “But that is just a guess,” he said.