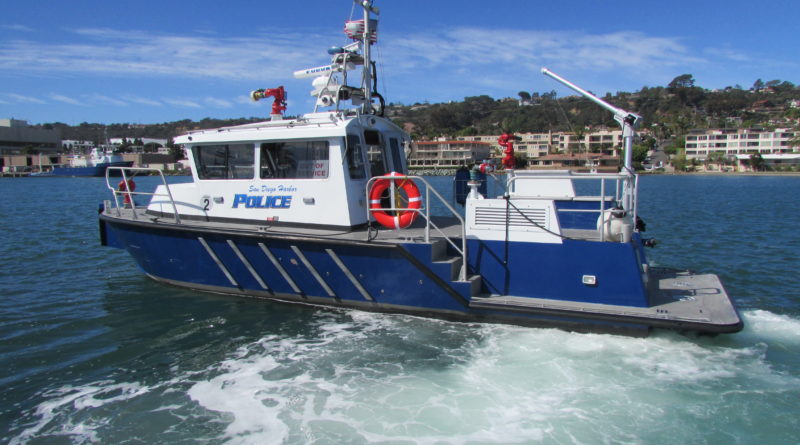 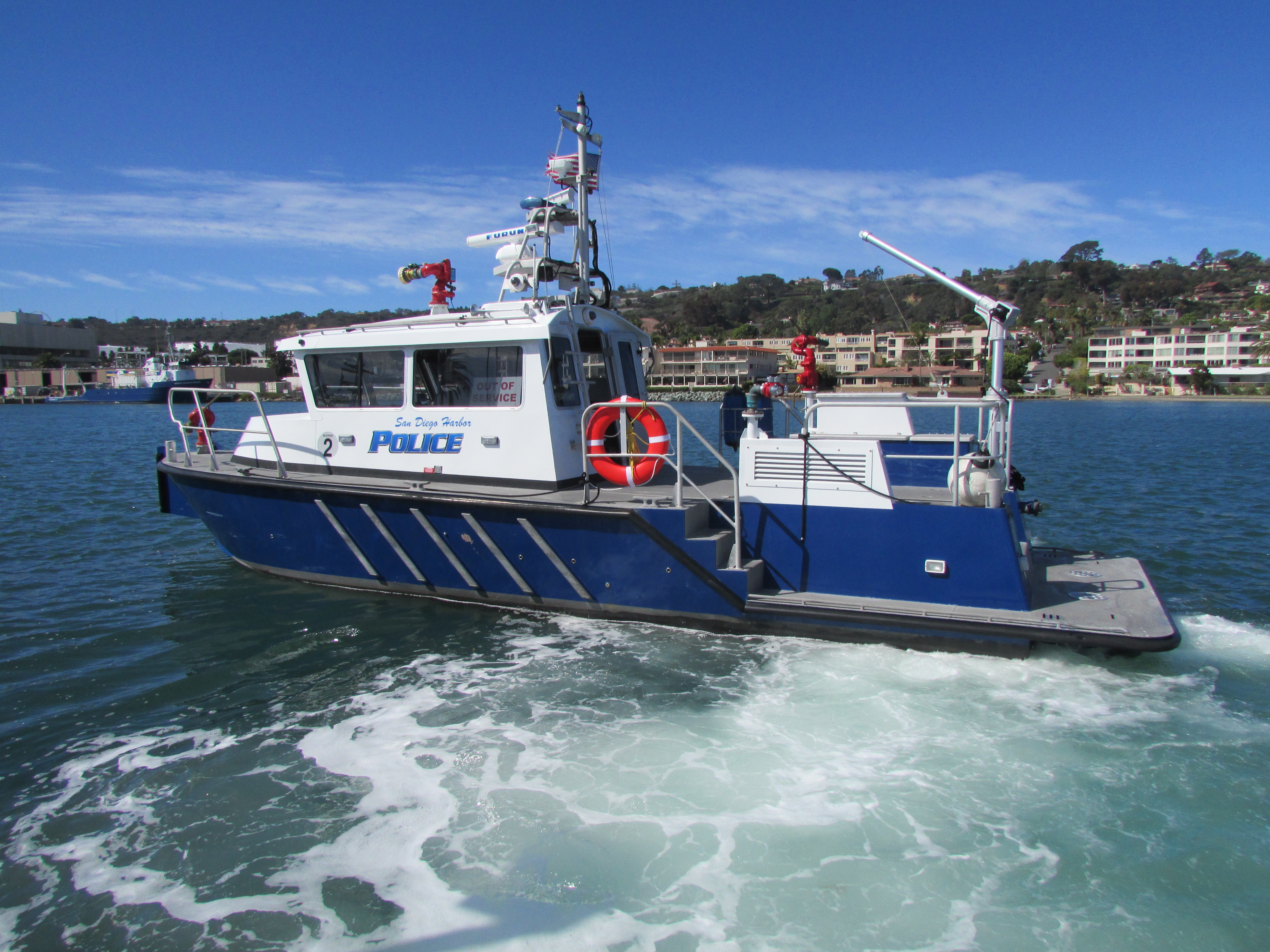 Officers patrol the city in cars, on foot, bicycle or by boat.

“At any given time we have one boat on the water 24/7 in the South Bay and another in the North Bay,” said Mark Stainbrook, San Diego Harbor Police assistant chief. “Most people don’t know how much we do; it’s a lot.”

San Diego Harbor Police officers monitor the port’s 25 marinas, yacht clubs and sportfishing landings on the tidelands. Vessel accidents, boats in distress and vessel aid calls are generally the most common calls received by the department. Of course with a bay that houses 7,626 boats and yacht slips, there are those marina domestic calls and reports from other boaters about illegal anchoring that come in from time to time.

“Policing and firefighting on the water has advances a lot more and we always need to keep up with that,” said Harbor Police officer Mike Bishop who gets out on the water once a week. “The firefighting capabilities on these boats alone are better than the old fleet.”

The former boat fleet had limited maneuverability, canvas tops and more than 20 years of wear and tear on them. The Firestorms have an enclosed cabin, can sit up to four and can move laterally. With two-diesel engines and an ability to hit 40 knots, the boats’ fire pumps can pump 1,700 gallons per minute.

Each vessel is equipped with firefighting equipment, dive tanks, breaking apparatuses and every tool that would be found on a fire truck. First aid kits, an AED and a water pump are also aboard.

“For the 18 year I’ve been here that has been something that’s been very nice to have when boater’s gets in trouble and take on water we can assist them,” Bishop said. “We can either get a commercial business to take over the operation or we assist them and tow them in.”

The department’s nine-member boat fleet consists of three safe boats that are used by the dive team and also used for interdictions and, one trailerable boat and five Firestorms.

“Our officers are highly trained and technically trained,” Stainbrook said.

Officers are required to pass a four-week training program, which qualifies them as marine firefighters. Those skills were tested on Dec. 16, 2013 when a boat fire broke out aboard a vessel at Sunroad Resort Marina.

“The Christmas lights caused a short right after the Parade of Lights,” Stainbrook said.

Two Harbor Police boats responded to the fire from the water side along with San Diego Fire-Rescue.

It was a boat fire at the Marriott Marina that remains on Bishop’s list of top response calls.

“The boat was fully engulfed and was probably the biggest fire we’ve seen,” he recalled. “We were able to put that fire out and able to save a lot of vessels from catching on fire and that was a total team effort. “

Chief of Harbor Police John Bolduc oversees the 120-member department that coordinates with various security forces that have a presence in San Diego. The U.S. Navy SEALs and the U.S. Coast Guard are a few of those partnerships maintained by the department.

“We depend a lot on partnerships with local partners and federal partners,” Stainbrook said. “Every day we are working with Coast Guard, Customs and Border Protection with issues of marine smuggling, and we work closely with the Federal Bureau of Investigation and the Transportation Security Administration.”

Although officers rotate among the three patrol areas, the department maintains open communication with boaters.

“We have an officer who is part of the National Safe Boating Association and one of her jobs is to put out boating safety information, go to marinas and distribute information and work with the boating community,” Stainbrook explained.

On land, Harbor Police work in crime prevention; deal with crime and quality of life issues such as managing homelessness on the tidelands. Officers can also serve on various specialized units such as the Explosives Detection Canine Team, Homeland Security Unit, Narcotics task Force or Harbor Police Dive Team among several others.

It’s the job’s diversity that keeps officers on their toes, Stainbrook said.

“Time on the boat, in a patrol vehicle and at the airport keeps them fresh and in different environments,” he added. “It’s all interconnected.”

Sgt. Todd Rakos, who has been with the department for 22 years agreed, “We do so many different things that it keeps it [the job] interesting.”