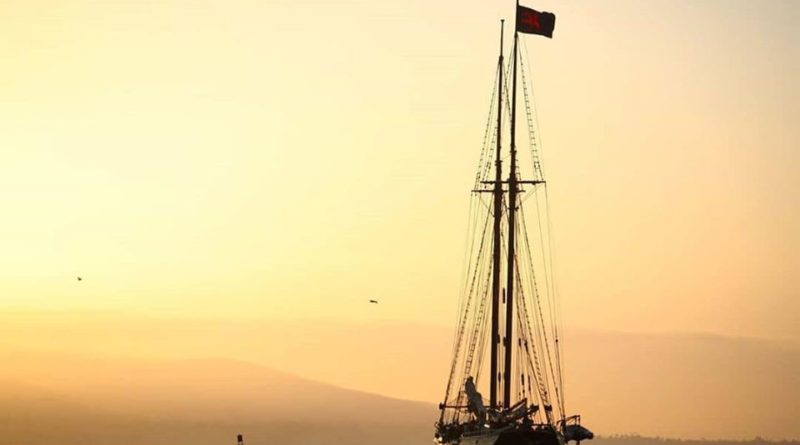 The useful life of the vessel that served as a working classroom for students and visitor is officially rendered over.

DANA POINT—One of the most iconic visuals at Dana Point Harbor is no more, as Pilgrim, the resident tall ship at the Ocean Institute dock, keeled in her slip overnight, it was announced on March 29. Pilgrim’s useful life was rendered over, as a result.

The original Pilgrim was built in 1825 – at the cost of $50,000, or about $1.14 million today. A historical narrative of Pilgrim shared by the Ocean Institute pointed out the merchant ship had navigated from Boston to California in 1834 to sell or trade various wares – foodstuffs, ironware, shoes, etc. The original Pilgrim regularly docked in San Juan Bay – which is what Dana Point was known as during the 1830s.

The replica was built in 1945 in Denmark. She is a three-mast brig, which sailed the world before docking in Dana Point to offer living history programs for thousands of students.

“We are very sad to announce that Pilgrim, our beloved vessel that has served as an inspiring real-world classroom to hundreds of thousands of students and visitors, keeled overnight in her slip on our dock, rendering her useful life over,” Ocean Institute staff said about the loss of Pilgrim in a Facebook post.

Ocean Institute staff added Pilgrim was to be taken out of the water for repairs in January, but the boatyard was overbooked. The haul-out, therefore, was re-scheduled for some time in June.

“As part of our maintenance process, Pilgrim undergoes out-of-the water and underwater inspections. In 2016 she was hauled out for survey and repairs and in October 2019, we began a fund to support the haul out and repair scheduled to take place in January 2020. The haul out was postponed until June due to overload at the yard,” Ocean Institute stated in its Facebook post on March 29. “Meanwhile, Ocean Institute maintained our certifications and the United States Coast Guard issued a Certificate of Inspection (COI) in December and again in February, allowing our dockside programs to continue. Unfortunately, Pilgrim keeled on March 29th and is incapacitated beyond repair.”

Richard Henry Dana, Jr. – the namesake of Dana Point – had mentioned Pilgrim in his novel, “Two Years Before the Mast.”

“We are sad to bid farewell to this iconic vessel which has been such an important part of Ocean Institute’s programs and to the children that they served,” Ocean Institute’s official statement continued. “Our staff was informed this morning and we all feel like we lost a dear friend, as I am sure many of you do. We will keep you posted and welcome your stories, images, etc., on how the Pilgrim has made an impact on you. Send to marketing@oceaninstitute.org or #thebrigpilgrim – please.”