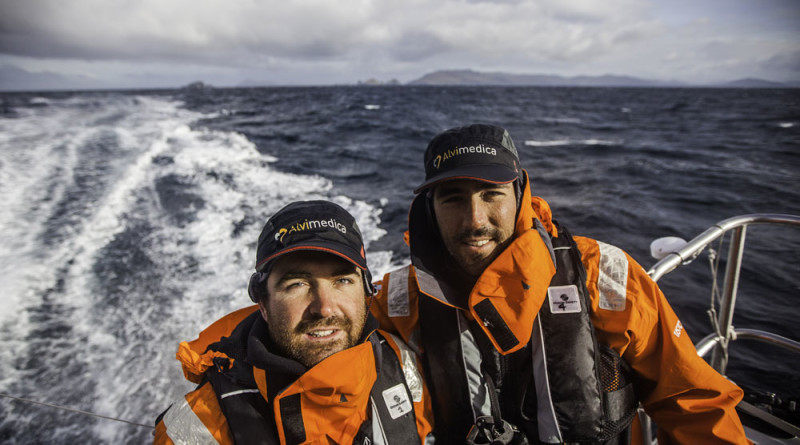 NEWPORT BEACH — America’s sailing representatives in the Volvo Ocean Race made a rare appearance in Newport Beach in February thanks to a speaker series hosted by ExplorOcean. Team Alvimedica skipper Charlie Enright and watch captain Mark Towill met with local boaters, community members, sailors and yacht club members in the Community Room at Newport Beach City Hall to share their experiences on the nine-month race.

Participating in the Volvo Ocean Race was a dream come true, said Towill. The race to sailors is no different than what the Super Bowl is to professional football players. The 2014-2015 Volvo Ocean Race kicked off on Oct. 19, 2014 and ran through June 2015. Sailors covered nearly 40,000 nautical miles of ocean during the race.

Getting into the race required massive amounts of hustle and effort, according to Towill. He frequently traveled to Spain and New York City to raise sponsorship funds. Participation in the Volvo Ocean Race could cost upwards of $15 million or more. Asking companies to shell out millions of dollars to two sailors who never sailed the world certainly posed significant challenges.

“There’s no Harvard Business School case study on how to find an eight-figure sponsorship for a sporting team,” said Towill of figuring out how to fund the sailing team in an environment where it is easier to allocate sponsor dollars to sports with larger audiences.

Towill, who calls Hawaii home, said their fundraising efforts were regularly met with rejection until they met with representatives from Alvimedica, a medical technology company seeking to enter the United States market. The company agreed to sponsor Enright and Towill’s team. Towill said the sponsorship helped salvage their dreams and made up for “tons of rejections.”

With the sponsorship secure Enright, who hails from Rhode Island, and Towill headed to the United Kingdom to take delivery of their race boat and immediately began fine-tuning her with two Trans-Atlantic trips. The duo would navigate 12,000 miles between April and October to assemble the race team and train for the big event.

The first leg was 27 days and ended in Cape Town, South Africa. Racers then navigated from Cape Town to Abu Dhabi, UAE in Leg 2 and from there to China in the third segment. The remainder of the race meandered through Oceania (Auckland, New Zealand), South America (Cape Horn and Brazil), and the United States (Newport, Rhode Island) before concluding in Sweden.

What was life like aboard the Team Alvimedica vessel? The one-design vessel featured a hull length of 66 feet, a maximum draft of 15.8 feet and overall beam of 18.4 feet. Eight men were on the boat for thousands of miles at a time – four were on top manning the ship while the other four were down below, in narrow quarters, trying to get rest.

Enright explained each crewmember would, on average, sleep four to five hours per day. There were days where crewmembers would go an entire day without sleep while at sea.

Nutrition was a problem, according to Enright, who lost 20 pounds during the race. Daily hygiene was nearly impossible to maintain, what with only one toilet aboard for eight men to use during three-week long navigations. Days would go by between showering.

Adding to the difficulty and strain are mental challenges and interpersonal interactions within tight quarters for weeks at a time amidst difficult situations.

The highlights certainly made up for the struggles, though. The navigation from New Zealand to Cape Horn took Team Alvimedica to Point Nemo, which Enright described as the most isolated place in the world. The closest people to you are not humans on Earth but instead the man in the space station stretch of ocean between Cape Horn and New Zealand, Enright joked.

Rounding Cape Horn was probably one of the greatest satisfactions of the race. Sailors consider rounding Cape Horn to be the same as reaching the top of Mount Everest. Cape Horn is almost at the bottom of the Earth. The sailing conditions there are rough, what with gale force winds, heavy storms and challenging waves.

“The race is such a mental grind. Sailing around Cape Horn was incredibly humbling.” Enright said.

Both sailors crossed the Equator for the first time in their respective lives. There was also a moment during the second leg when about 500 birds attacked Team Alvimedica. Towill said a video exists on YouTube, titled “Attack of the Birds on Alvimedica,” showing the experience.

An on-board reporter sent out daily content while at sea, while crewmembers had email access so they were able to be in touch with family and media and reply to questions to social media. Enright and Towill also had live calls via satellite.

Interestingly enough the Team Alvimedica duo used the Volvo Ocean Race to perform a task for NOAA. Enright and Towill deployed a drifter in a portion of the Southern Ocean where, as Enright explained, “no one had ever been … before.”

Crewing and managing your own boat during the Volvo Ocean Race is challenging enough. Trying to help another team in distress while on the course (and at the expense of falling behind in the race) is significantly more stressful.

Team Vestas Wind grounded into a stationary reef at St. Brandon in the Indian Ocean. St. Brandon is also known as Cargados Carajos shoals. The archipelago belongs to Mauritius, which is between 250 and 300 miles away. Cargados Carajos is a pirate zone, according to Enright. He added there was a cyclone in the area at the time of the grounding. The waters are shark infested.

Team Alvimedica served as a go-between with Vestas Wind, the local Coast Guard outfit and Volvo Ocean Race’s communications department. None of the other teams stayed back to assist.

Also on the mantle alongside the seamanship and sportsmanship recognition for Enright and Towill were several first place and podium finishes. Team Alvimedica was also the first crew to round Cape Horn during the race.

The duo is already gearing up for the 2017 race and is currently seeking a new title sponsor. They will continue to raise money through their new company, 55 South, which seeks to raise awareness of marine debris, for participation in the race.

“The amount of marine debris out there is tremendously expensive. There is a lot more under the surface,” Towill said, adding 55 South has partnered with 11th Hour Racing to promote sustainability and sailing.

All seven boats participating in the Volvo Ocean Race were one-design. Below is a partial list of boat specifications for Team Alvimedica and its competitors: