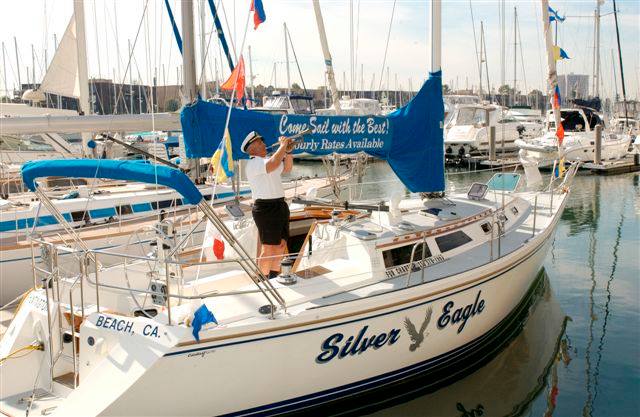 Illegal charters have been a longstanding issue in Marina del Rey, how far has the harbor come in stopping these activities? What still needs to be done? The Log asked Captain Alexander G. Balian, who has operated a yacht charter business in the harbor for three decades and been outspoken about the topic for many years.

MARINA DEL REY—Charters overloaded with people, charters operating out of their slips, passengers swimming in the harbor from boats with engines running, boat owners allowing operators without licensing to use their boats, these are some of the safety issues and problems Captain Alexander G. Balian has witnessed from illegal charters in the past 30 years in Marina del Rey Harbor. Like many harbors nationwide, illegal charters have been a longtime problem in Marina del Rey.

Illegal charters often draw in customers, who may be unaware the operation is illegal, with lower prices.

“If we don’t do it right here, not only is it wrong but it’s a safety issue,” Balian said. “There’s going to be accidents, people are going to die, boats are going to sink.”

Balian has owned and operated Paradise Bound Charters in Marina del Rey since 1990. He is a U.S. Coast Guard licensed Master Mariner 200 Tons Power and 100 Tons Sail captain. He has long been outspoken about illegal charters in the harbor and has advocated to Los Angeles County officials for prevention and enforcement measures.

“We’ve been screaming about illegal charters, I have myself since 2010, and it’s taken all this time, 10 years, to get it to the forefront to stop what’s going on,” Balian said.

Balian said Marina del Rey had only six charter companies 10 to 15 years ago and now there are 26. He attributed this to the efforts by himself, other legal charter operators and county officials putting pressure on illegal charter operations to become legal.

“Now it’s at the forefront so we can expect progress in my opinion, that’s what we’re hoping for,” Balian said.

The issue of illegal charters comes up on the Los Angeles County Department of Beaches & Harbors (DBH) Small Craft Harbor Commission agenda frequently, often after someone reports a problem. The most recent discussion took place at the commission’s Dec. 17 meeting.

“The COVID-19 pandemic appears to have inspired an increase in recreational boating, especially due to restrictions on other leisure activities earlier in the pandemic,” Los Angeles County Sheriff’s Department (LASD) Sargent Brent Carlson, who acts as the harbormaster for Marina del Rey, said in an email. “While illegal charters are an ongoing concern, we are hearing more complaints than usual.”

There have been several efforts over the past few years to combat illegal charter activity in Marina del Rey. One of those was Dock 55, a county-built facility that is managed by a private entity, Pacific Ocean Management. DBH opened Dock 55 in late 2017 to allow legitimate charter operators who weren’t able to secure a commercial lease with a Marina del Rey leasehold a legal place to operate. Marina del Rey regulates where charters can and cannot operate from in the harbor. Balian advocated for the county to build Dock 55.

“This is one way of solving it because if you give them a commercial place to land and pick-up people, if you give them that like they do in Newport and other harbors, then you will see people cooperating and not doing illegal charters,” Balian said.

He said there have been some growing pains associated with the dock. The dock can hold at most three boats at a time and Balian said the most recent issue is overcrowding.

“Dock 55 has become saturated to the point where during the summer, this summer, we had boats lined up trying to get in there,” Balian said.

Balian now hopes the county will create two similar docks, one at Pier 44 and one on B Basin, to handle the load.

Another effort to combat illegal charter activity has been a task force made up of the Los Angeles Sheriff’s Department, U.S. Coast Guard, L.A. County Department of Treasurer and Tax Collector, and DBH. The task force was created in 2017.

Balian said progress has been made but said he would like to see a more active inspection program.

“Laws exist but enforcement does not,” Balian said. “Enforcement is starting to get better.”

At the Dec. 17 Small Craft Harbor Commission meeting, Sgt. Carlson encouraged anyone who sees illegal charter activity or associated safety issues to call them at 310-482-6000 and they’ll send out a boat.

“Unfortunately, illegal chartering can be a lucrative business, and as long as there is a continued demand for such services, it’s extremely difficult to eliminate the practice entirely,” Sgt. Carlson said in an email.

“There’s enough business for everybody,” Balian said. “None of us are going to suffer because there’s a lot of charter companies.”