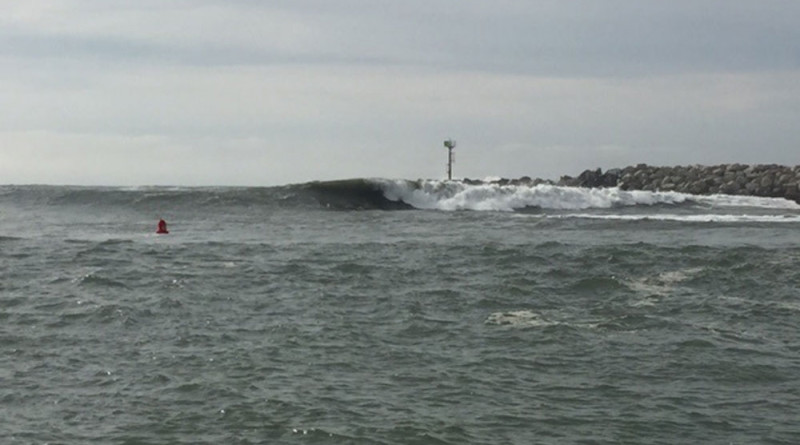 VENTURA — Heavy shoaling and hazardous conditions has continued to limit navigational operations at Ventura Harbor since a sandbar was observed forming at the venue’s entrance on Jan. 17.

Ventura Port District officials informed The Log during a recent visit more than 240,000 cubic meters of sand filled the front of the harbor entrance during the final two weeks of January, increasing sand sediment beneath the water’s surface to just shy of 1 million cubic meters and making it difficult for recreational boats and commercial vessels to access the Pacific Ocean or local marinas.

Weather conditions during the final weekend of January did not help matters. Ventura Harbor was hit with 68-mile-per-hour gusts on Jan. 31, according to news reports.

“This is the impact of El Niño. It’s unprecedented,” said Oscar Peña, general manager for the Ventura Port District.

The port district already has $4.8 million allocated for dredging of the harbor entrance; the Army Corps of Engineers agreed to allocate an additional $2.5 million, according to news reports. Dredging equipment began arriving at the harbor entrance on Feb. 4.

Ventura Harbormaster John Higgins said the shoaling occurred because El Niño caused the sand trap just north of the harbor entrance to overflow and spill into the main channel. Large amounts of sand filled the main channel from the south, as well, thanks to residual amounts of sediment that were pushed to the Ventura coast after last summer’s storms near Mexico.

Sand overflowing from both sides of the main channel resulted in boaters being given only 30 feet of space to navigate at the harbor’s entrance, compared to 300 feet of space under normal conditions.

“The harbor entrance continues to receive sand from both sides of the harbor,” Higgins said. “The last couple of storms have once again had breaking waves across the entrance.”

Port officials were already preparing for dredging before the shoaling occurred, Peña said. The situation could have been worse had dredging plans not been in place just prior to the recent storms, he added.

Still, the increased sand level at the harbor entrance is considered a local emergency. A handful of boats, mostly commercial, navigating in and out of the harbor must be escorted through a narrow channel at the center of the entrance.

A “Safety Zone” is in effect to limit traffic in and out of the harbor, according to Higgins.

“We have continued the U.S. Coast Guard Safety Zone closure within the harbor. We are working with the Ventura County Office of Emergency Services to see if there are assistance programs available,” Higgins said.

Higgins added both he and port district officials met with marine-related businesses and commercial fishermen to determine the economic impacts of the harbor closure and to update boaters of the planned dredge.

Interestingly enough at least one commercial fisherman and a handful of recreational boaters said they were not impacted by the shoaling.

“At this point we can’t go out, but there’s no fish to go out for,” said Capt. Jesse Long of Ocean Angel V. “If fish did show up we can get out, but there’s a chance we might not be able to get back in. We’d go to other ports to deliver.”

Long, who fishes for squid, added he was required to inform the Coast Guard and be escorted through the harbor entrance if he elected to head out to sea at any point during the current closure.

Two boaters at Ventura West Marina told The Log in separate interviews they rarely leave the harbor during winter months, so the shoaling really is not impacting them.

The shoaling still impacted a few corners of Ventura Harbor.

Ventura Harbor Village was slated to host two tall ships in January and February; however, the shoaling forced the tall ships to relocate to Channel Islands Harbor in neighboring Oxnard.

One marina operator told The Log he lost at least two slip reservations because boaters were not able to enter the harbor.

The Coast Guard and port district officials have been working together to escort select current tenant vessels in and out of the harbor, according to Higgins.

“We continue to take requests on a one by one basis to determine if we can accommodate escorting of vessels in or out of the harbor,” Higgins said. “We do have regular contact with the commanding officer of USCG Station Channel Islands and together we are doing are best to ensure the boaters safety and accommodating requests when appropriate. If we feel there is a need and we feel comfortable with the request we then seek permission from the U.S. Coast Guard Captain of the Port.”

Higgins said he hoped the harbor would be fully open by mid-February. A statement released by Ventura Harbor Village said the waterfront venue is open for business.

“We realize the Safety Zone’s impact on the community and hope they will remain supportive as we move forward to mitigating the problem,” he said.