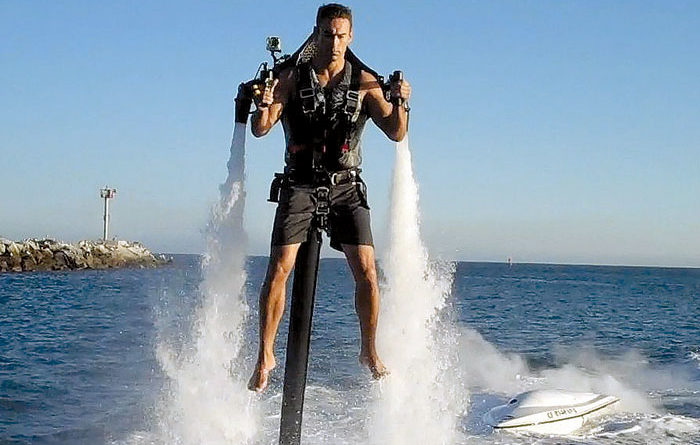 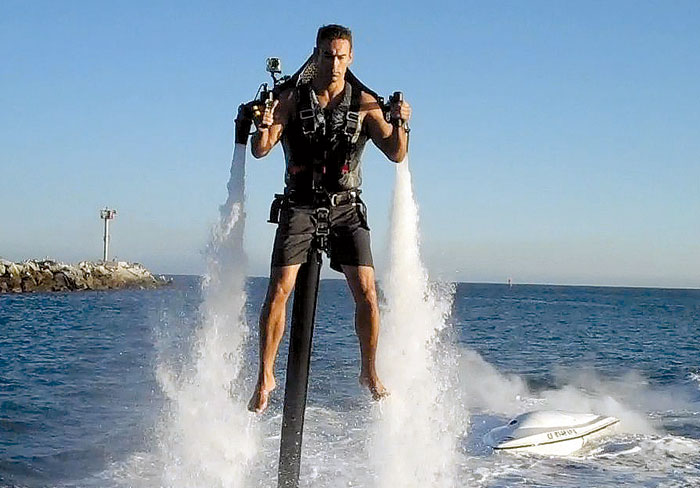 NEWPORT BEACH — Crossing the Catalina Channel by air is not a new endeavor — in fact, it’s 100 years old. And in celebration of the 100th anniversary of Glenn L. Martin’s first seaplane flight from Newport Beach to Avalon, JetLev Southwest president Dean O’Malley has planned to set a record of his own — crossing the channel by jetpack.

Based in Newport Beach, JetLev Southwest rents water-powered jetpacks that can send users more than 30 feet in the air above water, at speeds up to 35 mph.

While the R200 jetpack is usually used in the calm and safe waters of Newport Harbor, O’Malley aims to traverse the 26-mile run to Catalina braving the open ocean, and creating a new long-distance record in the process.

“We heard about the 100th anniversary of Glen Martin’s first flight, and we wanted to make it happen,” said O’Malley, who left his job in banking to work with the company last September. “He flew a plane, and we’re flying jetpacks — it’s a sort of a ‘welcome to the future.’”

The flight will take place around 6 a.m. Sept. 29, in an effort to get the calmest waters possible for the flight over. O’Malley expects the trip to take about two hours, planning on averaging about 15 mph on the ride over.

“With the wind and the waves and the chop, this is going to be a lot more strenuous than going around the harbor, but I think it’s very doable,” O’Malley said.

While he has only flown for about an hour at a time, the jetpack should be able to make the trip, operating on a 22-gallon fuel tank that is designed to allow for around three hours of flight time. John Morris, CEO of JetLev Southwest, will be following O’Malley by boat, acting as a support vessel on the attempt in case help is needed.

Over the past month, O’Malley has been testing the pack on the open ocean, flying around Balboa Pier and in Newport Harbor in late afternoon to test the pack in heavier winds and rougher seas. He has also been staying airborne for longer stretches to increase his endurance.

O’Malley is scheduled to arrive at Avalon Harbor between 8 and 9 a.m., kicking off the start of the inaugural Catalina Air Show planned that day.

Described as a risk-taker, O’Malley has always gravitated toward the more extreme sports, enjoying wakeboarding, snowboard and scuba diving over the years. After 12 years working in banking, O’Malley said he became fed up with the bureaucracy and rigidity of large companies, and began searching for a new opportunity.

Two weeks after quitting his previous job, he was introduced to JetLev Southwest, and was immediately intrigued by the company’s exciting future.

“There’s an extreme aspect to it — you’re flying jetpacks around, and it’s hard to not be drawn to that,” O’Malley said. After one year working full-time with the company, he is excited to take on another challenge with the cross-channel attempt.

“People have paddleboarded, kayaked and jet skied across the channel, but none of those are really viable means of transportation,” O’Malley said. “I think this could inspire people to make the trip, and hopefully someone else comes along and pushes it to an even further extent, to see what can really be done out there.”

The launch is scheduled to take place at 6 a.m. Sept. 29 at Newport Harbor’s channel entrance, near the Wedge.