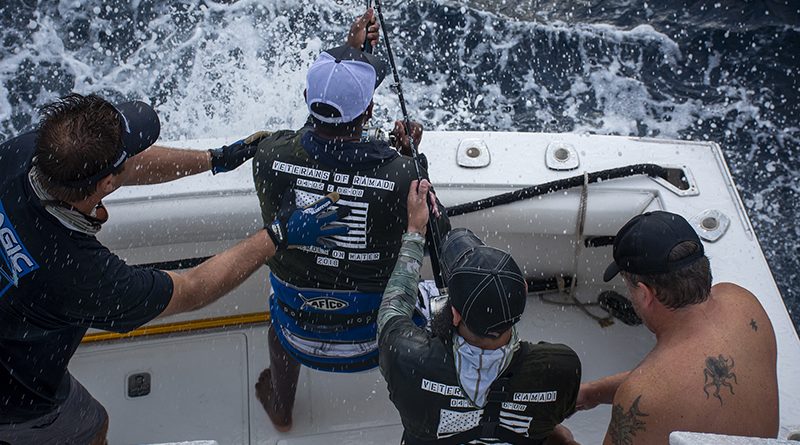 The goal for WHOW is to host an on-water event that uses the power of the ocean to help combat-wounded Veterans establish the vital connections necessary to replace feelings of isolation commonly associated with reentry into civilian life. Image courtesy of WHOW

War Heroes on the water is returning for its fifth annual fishing tournament, where a fleet of 50 will host several veterans per vessel for a three-day friendly competition that benefits combat-wounded vets.

NEWPORT BEACH— War Heroes on the Water is returning Sept. 23-27 for its fifth annual, three-day on the water experience giving combat-wounded veterans the unique venture of deep-sea fishing on a hosted vessel. LoanDepot CEO and executive chairman Anthony Hsieh founded WHOW in 2018.

This year, a fleet of 50 of the region’s local sportfishing boats will carry 125 veterans in teams of 2-4 per vessel on the adventure of a lifetime to partake in sportfishing along the waters of the Southern California coast. Some vessels are returning sponsors, and others are embarking on their first WHOW experience. If they’re successful, they will have their catch weighed and photographed on Avalon’s Green Pier at the end of the event.

“Usually [there is] one captain per vessel, but there are also situations where both the yacht owner and captain work together, or the owner is the captain,” explained LoanDepot Public Relations Officer Jonathan Fine in an email from Aug. 23.

On Sept. 24 at 5 p.m., yacht owners, captains, anglers, and veterans will participate in a parade through Newport Harbor before embarking on their trip. Following the parade, the crews will head to sea to experience two full days of deep-sea fishing from Sept 24-26. Closing ceremonies will be at 4 p.m. on Sept. 26, followed by tournament weigh-ins on Avalon’s iconic Green Pier.

The boats will only fish in local SoCal waters.

Hsieh conceptualized WHOW in 2018 after he returned from a fishing trip he held for a group of veterans. Before returning to port, he had already created a vision for the tournament. Hsieh designed the tournament to show appreciation for America’s heroes— servicemen and women. WHOW is not a tournament created to break records; instead, it was created to change the lives of combat-wounded veterans and bring enjoyment to their lives after touring while raising funds for organizations to support veterans. Today, WHOW raises money for its charitable partner, Freedom Alliance, an organization dedicated to rehabilitating wounded service members, combat veterans, and military families.

“Supporting our nation’s heroes is our priority at Freedom Alliance and our continued partnership with War Heroes on Water is another component of our commitment to helping wounded veterans on their path to healing,” said Tom Kilagnnon, President of Freedom Alliance in an email from Aug. 23. “The therapeutic properties found in nature, especially on the ocean, are incredibly beneficial to these men and women who were physically or mortally wounded in combat. Freedom Alliance is honored to be a part of this annual event.”

In 2021, the charity raised $1.35 million to benefit combat-wounded veterans.