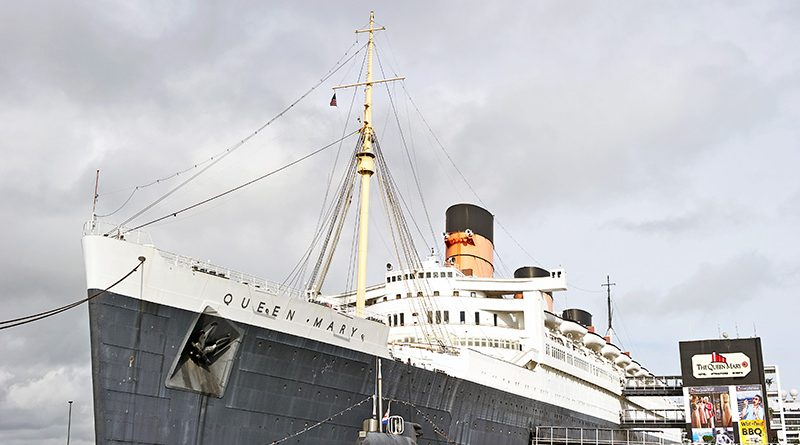 The RMS Queen Mary, an ocean liner, sailed the North Atlantic Ocean from 1936 to 1967, before retiring and taking up a mooring in Long Beach Harbor. Shutterstock image.

The Queen Mary was built in 1930 in Clydebank, Scotland, by Cunard Line, a British cruise line based at Carnival House in Southampton, England. The project was initially known as job #534, and due to the economic setback induced by the Great Depression, the ship’s construction was finished in three and a half years and cost 3.5 million pounds sterling which is equivalent to $4.8 million in today’s USD.

Cunard decided to name the ship after Queen Victoria, but as legend has it, Cunard directors went to ask King George for his blessing of the ship’s proposed name, according to the Queen Mary website.

“We have decided to name our new ship after England’s greatest Queen,” says the article. “But King George’s reported response was, “My wife [Queen Mary] will be delighted that you are naming the ship after her.”

On May 27, 1936, the Queen Mary set sail on her maiden voyage, departing from Southampton, England. The ship was constructed with five dining halls and lounges, two cocktail bars, two pools, a grand ballroom, a squash court, and even a small hospital. The Queen Mary had set the bar for transatlantic travel, catering to the rich and famous, who were typically the only people who traveled at that time.

The Queen Mary retired in 1967 when she became a Southern California attraction after she found her current home in the Long Beach Harbor. In her heyday, The Queen Mary carried 2.2 million passengers during peacetime and 810,000 military personnel in the Second World War. Since her retirement in Long Beach, the ship has seen an estimated 50 million visitors.

The day the Queen Mary was christened in 1934, a well-known English psychic by the name of Lady Mable Fortiscue-Harrison predicted, “the Queen Mary will know her greatest fame and popularity when she never sails another mile or carries another fare-paying passenger,” according to the Queen Mary website.

Today, the Queen Mary is known as a haunted attraction. “The unique history of the ship allows us to offer a one-of-a-kind and authentic experiences that delve into the paranormal, from evening tours and ghost investigations to overnight stays in our haunted Stateroom, B340,” said Chris Wilmoth, Director of marketing at the Queen Mary to Travel and Leisure.

One thought on “The History and Hauntings of the Queen Mary”