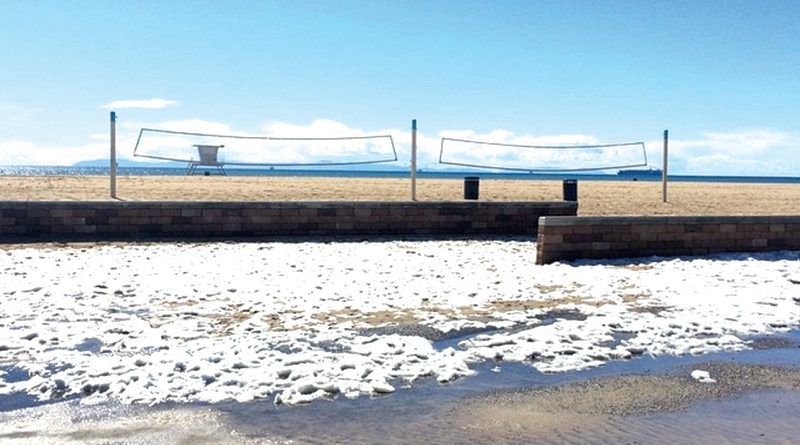 HUNTINGTON BEACH — On March 2, 2015, the city of Huntington Beach witnessed a very rare snow day. Although the white blanket that covered the sand on the beach was actually hail, the beach city was transformed into a winter wonderland for one day. The hail pellets were up to a quarter of an inch in diameter, relative to the size of a BB bullet or a pea, and covered the city an inch deep. The hailstorm occurred due to a convective rain shower with a fair amount of precipitation.

Residents of Huntington Beach got excited as they all made their way down to the pier to see the white dusted shoreline, surfers made snow angels, and kids made miniature snowmen. The hail had melted by the late afternoon. The beach was subject to a “special marine warning” from the weather service, which said a cluster of strong thunderstorms were centered on Huntington and Newport beaches at about 10 a.m., with the possibility of waterspouts. March 2, 2015 is the last day Orange County saw “snow” on their shores but according to the National Weather Service San Diego forecaster Mike Watkins, hail in warm beach cities is not unheard of nor is it a phenomenon.