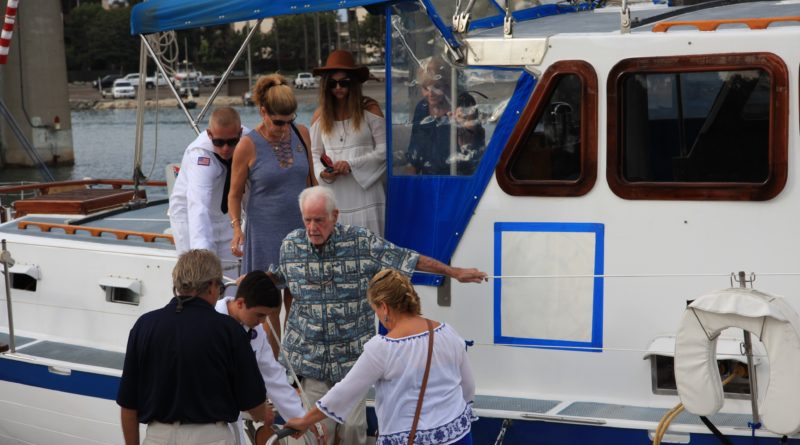 LONG BEACH — Edward (John) Miller – crewmember in sailing competitions, owner of marine shops, builder of his own boats, and senior member of Long Beach Yacht Club – died, Sept. 16. He was 93.

Miller participated in 13 Newport to Ensenada races and four TransPacific races, which included the 1967 TransPac race aboard Queen Mab, a 78-foot schooner.

“From a boating perspective, he was a stud,” his son-in-law Drew Satariano told The Log. “He was a really good guy to have on a boat.”

He also built “three boats in his lifetime” to own and not sell, Satariano clarified.

A couple of the boats he built were his powerboat, Spare Time, and 62-foot Ferro-cement cruiser, Maui Diamond.

“It’s almost inconceivable that one person built that boat,” Satariano said about Maui Diamond, a yacht with three staterooms with the capacity to sleep seven people.

Miller often took Maui Diamond to Catalina Island single-handedly up until he was 90 years old, according to Satariano.

Miller had the most seniority at Long Beach Yacht Club having joined in 1959. His longevity at the yacht club qualified him to have the biggest and closest slip to the club, Satariano said.

The “last seven or eight years have been especially good for him,” Satariano stated, “because he could spend three or four months on the boat in the summer.”

Miller donated Maui Diamond to the Long Beach Sea Scouts this summer. The Sea Scouts’ programs educate young people (from the age of 13 to 21) about boating and the ocean.

The donation of Maui Diamond has helped to revive the organization as membership was down, according to Satariano, and now the organization has a waiting list. Sea Scouts have ventured to Catalina Island aboard the vessel twice within two months.

Donations are being accepted to fund the maintenance of Maui Diamond in honor of Miller. Click on “John Miller Donation Link” to donate to longbeachbsa.org/seascouts to keep his dream and former yacht alive for the youth of today.