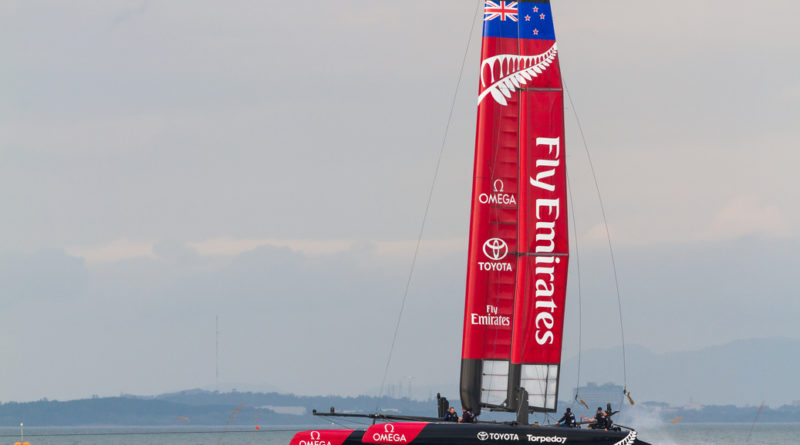 AUCKLAND, New Zealand — The 36th America’s Cup will be held on the Auckland waterfront in 2021.

Emirates Team New Zealand, Auckland Mayor Phil Goff and federal Economic Development Minister David Parker announced an agreement had been reached over the structure of the base village for the event, March 26.

“We have agreed a base configuration that is less expensive than previous options and requires a much smaller extension into the harbor. It allows the earlier removal of hazardous substance tanks from the southern part of the Point, is more straightforward to consent, will be quicker to construct and creates a positive legacy for Auckland,” Goff said.

“This is a huge relief to have reached the agreement with Government and Council over the event venue and host agreement. Our determination to have the event in Auckland never wavered despite plenty of challenges right up until the 11th hour,” Team New Zealand CEO Grant Dalton said.

The Emirates Team New Zealand plan essentially eliminates the need for any extension of the Halsey Wharf, which brings with it a significant cost reduction and situates the team in the Viaduct Events Centre. One team would then be housed on the extension on Hobson Wharf, while the remainder of the team bases line up along the Wynyard Wharf.

Parker said he felt this was the best outcome under the circumstances.

“I am very pleased to advise that we have succeeded in negotiating a venue on the Auckland waterfront that all New Zealanders can be proud of. It significantly reduces the intrusion into the harbor at the lowest practical cost,” Parker said in a statement. “Our work in reaching this point has seen a major cost reduction for taxpayers and Auckland ratepayers of more than $50 million, compared to other options.”

The announcement that a plan has finally been approved has been well received in New Zealand as there have been growing concerns the event would not be held in Auckland, which would have been a disaster given the lengths Emirates Team New Zealand went to winning it from Team USA in Bermuda in 2017.

Team New Zealand became a household name in their home country following their consecutive wins in the America’s Cup in 1995 and 2000.