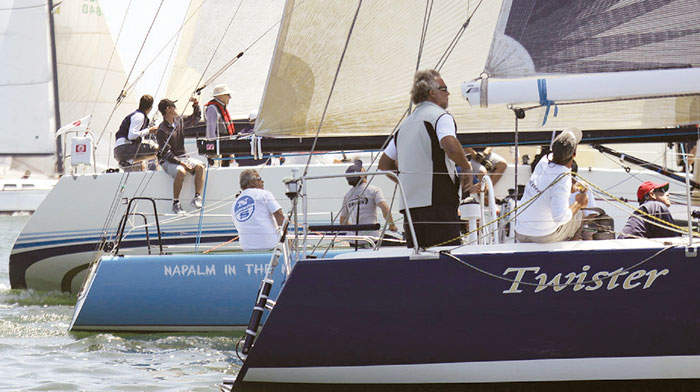 LONG BEACH — After four successful editions of the springtime Border Run International Sailboat Race, its organizers said they “got itchy to put on another event while the sun was warm.” So, a couple of months ago, they started planning a sister race they dubbed the Border Run2.

According to race founders Bob Long and Randy Reynolds, the idea was founded upon the same principles and tenets that have made the original Border Run the most attended race in Southern California: inclusion, course flexibility, various opportunities to win trophies and lots of parties.

“We saw an opening in the calendar around the Fourth of July holiday, and we thought we should promote a race for sailors who want to get some sailing in during that window,” Long explained. “A nice trek down the coast in a summer breeze is not a bad way to spend a weekend.”

Long and his partners were also pleased to start the race from the shores of Long Beach, where there is often a good amount of breeze. With very little promotion, the organizers said, they were able to sign up 73 boats and provide a choice of four different racing courses.

Smaller boats could choose to sail to Newport Beach or Dana Point, while the others could pick from two different routes to a San Diego finish.

“When asked to be the organizing authority for the event, we were excited at the opportunity,” said Warren Wolfe of Shoreline Yacht Club of Long Beach. “73 entries for the first year with two months’ notice shows the potential of this race. Next year, with it being on the 2013 calendar, we hope to make this the event a summertime tradition that sailors will not want to miss.”

All kinds of boats participated this year, ranging from multihulls, PHRF monohulls, cruisers, dinghies and beach cats to kiteboards and a Hobie Mirage sailing kayak.

“It was great to see a little Hobie Mirage (essentially a kayak with pedals and a small suit of sails) go for it and sail the 31-mile course down to Dana Point,” Reynolds said. “That’s what it’s all about for us: getting all kinds of different people and boats out on the water.”

“It was a great race and a great time at Dana Point Yacht Club,” said Dan Hodge of Dana Point YC. “It was especially exciting as everyone cheered for the Hobie Mirage as it crossed the finish line — an accomplishment skipper David Stivers can be proud of.”

Reynolds and Long said that the inaugural edition of the Border Run2 race was something of an experiment, to see if a sailboat race could in any way compete with the holiday’s many other activities. And now, with the experience behind them, they believe that this race can be a tradition for the many racers who want to make the most of the summer weather.

“We were actually encouraged by the turnout,” Reynolds said. “Now we have something to build on, and we’ve already started formulating what we’ll be doing next year. There have been some really interesting ideas kicking around about how to make it a race that blends with the holiday — sort of a family event and competitive race, all in one.”