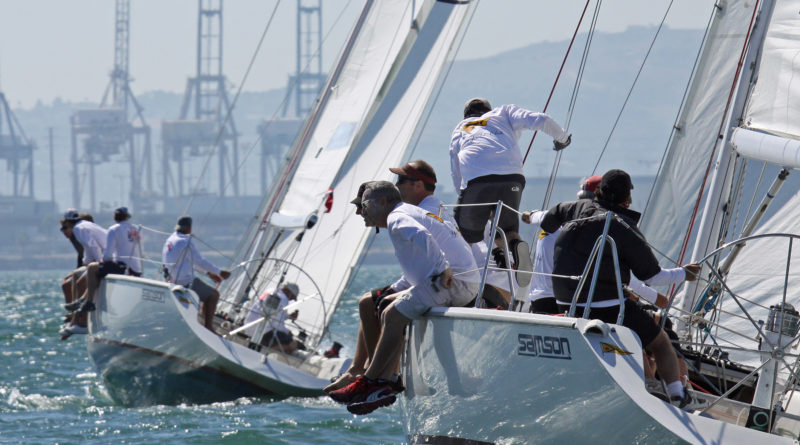 LONG BEACH — Mike Burch, commodore of Cabrillo Beach Yacht Club, won the Association of San Pedro Bay Yacht Clubs 2015 Walt Elliott Harbor Challenge Sunday, April 5. Burch will be taking the Walt Elliott Trophy back to his club, which has now won this regatta 15 times since it began in 1968.

This year, the defending club, Long Beach Yacht Club, was the host. Cabrillo Beach YC was the first club to respond when Long Beach YC began accepting challenges for the trophy. That gave Cabrillo Beach YC the opportunity to pick the type of boat for the regatta, and they chose the Long Beach Sailing Foundation’s fleet of Catalina 37s.

Under sunny skies and a southwesterly breeze between 8 to 15 knots, the one-day regatta was sailed in Long Beach Harbor off of the Belmont Veterans Memorial Pier, an area that has come to be known as Congressional Cup Stadium.

Since there were only three races scheduled, it seemed the tone had been set.

However, at the start of the second race, Burch and his team had an early lead and let everyone know they were not going to go down without a fight.

“The second race of the day,” said Burch, “we rounded the weather mark first and immediately did a perfect jibe set. That was our biggest gain of the day.”

At the start of the third race, three of the four boats were closely bunched, all on starboard tack when Burch tacked over to the right side of the course just as a right-hand wind shift kicked in. He rounded the first weather mark with a solid lead and never looked back.

“It could have been anyone who won today,” Burch said. “Everyone sailed really well. We were blessed with good breeze and good weather.”

Hood and his Long Beach YC team took second place on a tiebreaker with Alamitos Bay YC’s commodore Chuck Clay and his team.

“We had a really good start on the first race,” Hood said, “and had strong legs and we held on.

“We had great competition today. Congratulations to Cabrillo Beach Yacht Club. They are really great guys. I just finished a race to Cabo [San Lucas] with some of them. Hats off to Cabrillo.”

The Association of San Pedro Bay Yacht Clubs has been holding the regatta since 1968 among member yacht clubs in the greater Los Angeles and Long Beach area. Yacht clubs that have won the regatta are open to be challenged the following year. The challenging club chooses the type of boat, be it One-Design or a handicap rated boat. This year’s challenge came from Cabrillo Beach YC.

Walter Elliott was one of the top yachtsmen on the West Coast who during the 1940s and 1950s skippered his 46 foot racing sloop, Escapade, in many local regattas and ocean races. Among his racing accomplishments he won the 1941 Transpacific Yacht Race (Transpac), was a four-time winner of the SCYA Lipton Cup, class winner in the Newport to Ensenada Race and had multiple wins in the SCYA Midwinter Regatta.

The Walt Elliott Harbor Challenge Trophy was dedicated to the memory of her father by Mrs. Betty Elliott Field.