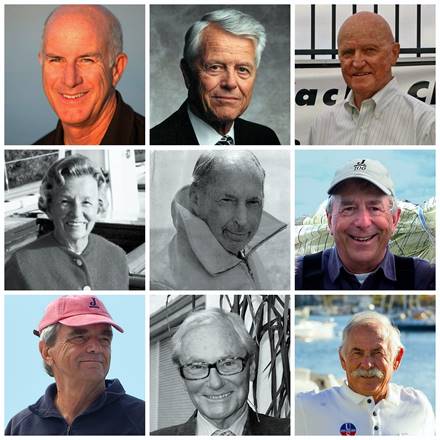 Bill Ficker, Dave Ullman and Mailn Burnham to be honored at October event.

ANNAPOLIS, Maryland — The National Sailing Hall of Fame (NSHOF) on July 11 announced the nine people who will make up its 2016 class of inductees – four of the honorees hail from California.

“The achievements of this year’s group of inductees – whether on-the-water, at a drafting table, or in teaching and coaching others to succeed in the sport – have at their root a joy of sailing that has inspired and affected countless competitive sailors and recreational boaters,” said Gary Jobson, president of the NSHOF. “The NSHOF is proudly preserving the history of the sport and its impact on American culture while inspiring the next generation of sailors by recognizing these contributors and sharing their stories.”

Inductees are American citizens, 45 years of age or older, who have made significant impact on the growth and development of the sport in the U.S. in the categories of Sailing, Technical/Design and Contributor (coach, administrator, sailing media).

The 2016 class of inductees will be celebrated on Oct. 30. The invitation-only Induction Ceremony will be held at the St. Francis Yacht Club in San Francisco, California.