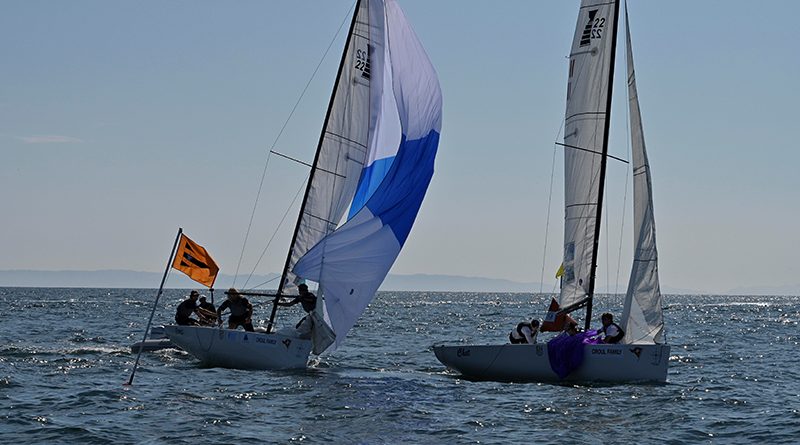 Stevenson is ranked number 12 on World Sailing’s Open rankings premiering in the GovCup in 2019.

Stevenson faced off on the final day of racing against home team Petersen from Balboa Yacht Club.

Petersen started off strong on day one and held on tight throughout the week and into the finals giving Stevenson strong competition at the end.

Stevenson started with three wins on the first day and worked his way up to a tie for second place on day two, lined up with Jack Egan (USA), who went undefeated on day two, and Marius Westerlind (SWE).

By day three, Petersen and Stevenson had secured their semifinal slots, with Stevenson just one point behind the USA team at 14 points.

In the semifinal with Egan, Stevenson took the lead and had a penalty to “kill,” which required him to either cause a penalty on Egan or complete an approximately 270-degree turn before the finish.

Stevenson allowed himself to be “caught” and then used the racing rules to gain an inside position at the BYC Race Committee boat, and not only prevented Egan from finishing but also stopped his opponent’s boat.

At that point, with greater initial speed, Stevenson could tack and then jibe, which would have killed the penalty.

However, his loss of speed and need to make the maneuver as soon as possible caused his boom to hit the port side of the Race Committee boat, resulting in another penalty. At the same time, Egan still stopped at the Race Committee boat, slid sideways, and hit its starboard side. At that point, Stevenson completed his second penalty turn and was awarded the victory.

Chief Umpire Flavio Naveira (ARG) said afterward that it was the “best I’ve ever seen in all the years I’ve been an umpire!”

Coming into the “first to three” point series in the finals against Petersen, Stevenson took races one and two and then took three tries to get that final point.

Petersen raised a red protest flag on race three after an incorrect rounding when the Race Committee moved one of the leeward “gate” marks to square the gate to the wind.

Since the move couldn’t be made by the time the boats were approaching the mark, that left a single mark, which needed to be rounded in a clockwise direction. Stevenson did so and started up the course.

Petersen then rounded in the other direction, and once he realized his mistake, he returned to round again. However, even then, he did not “unwind the string” of his first incorrect rounding and therefore had still not rounded the mark.

In the next race, Stevenson notably slowed down due to hitting a patch of kelp. At the end of the race, he found 88 pounds of kelp on the keel.

As he returned to the line with no rights against Petersen, he committed a double penalty for an intentional foul, which meant he had to do his penalty turn immediately.

This action erased the penalty for Petersen but left Stevenson with one penalty turn to complete. His boat speed and tactics were again sufficient to eke out a lead, but it was unclear whether he had enough distance to finish his turn before the hard-charging Petersen finished.

Stevenson and crew did an excellent job with the turn, but Petersen got a puff, then an overlap, and was surging past Stevenson.

The large spectator fleet had to wait for the Race Committee to raise a yellow flag indicating that the New Zealand team had won by two or three feet, giving Stevenson the Cup.