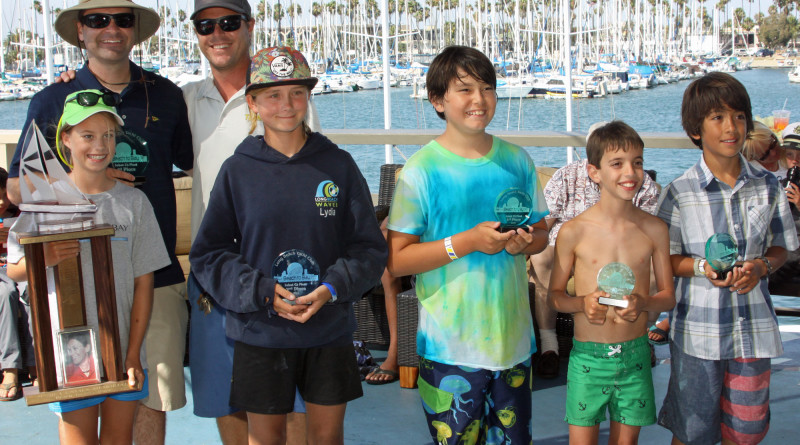 LONG BEACH — Paige O’Dell of Alamitos Bay Yacht Club was the first to finish July 23 in the Sabot C3 class and was awarded the Jessica Uniack Memorial Beach to Bay Race perpetual trophy for first place in the largest class in this year’s 28th annual event hosted by Long Beach Yacht Club.

More than 180 young sailors ranging in age from 7 to 17 were greeted by an overcast morning with virtually no breeze and waited for nearly 2 ½ hours before the wind finally began to build and they were able to start racing.

Because of the time delay and the still building light breeze, Principal Race Officer Jess Gerry chose to shorten the usual 5-nautical-mile course to about half that distance so that the sailors could get to Long Beach YC for the pre-planned post-race party and ceremonies.

My ultimate enjoyment, Gerry said, “is seeing all of these sailors, some of which are 7 or 8 year olds who began sailing this summer, racing in this event and seeing how proud their parents were.”

The Naples Sabot made up the majority of the fleet which also included Optimists, Club FJs, Lasers and the MicorKat catamarans, new to this year’s race. Most of these classes sail in bays and occasionally on the ocean, but this is the only junior sailing event of the year where the 8-foot-long Sabots ever venture out on the ocean.

A former Junior Sailing Director at Long Beach YC, Alex pitched in both on and off the water by setting race marks, coaching sailors and helping to hand out the hardware at the trophy ceremony. Better than most, he understands the organization and support that is required to hold a junior sailing race of this size and the positive impact it can have on a young sailor and their family.

Alex thanked race sponsors Bellingham Marine, Sailing Pro Shop, Gladstone’s and Ganahl Lumber as well as participating sailors and yacht clubs. He added, “most importantly I wanted to thank the parent volunteers. My mom was constantly volunteering and helped make our sailing experiences and events like this great.  It’s the parents that do the driving, the hauling and everything else that goes into the day. And it’s the parents who create these events. Thanks for choosing to support this event,” he said. “These are your clubs, your programs and events. Positively contributing to them only makes it better for everyone.”