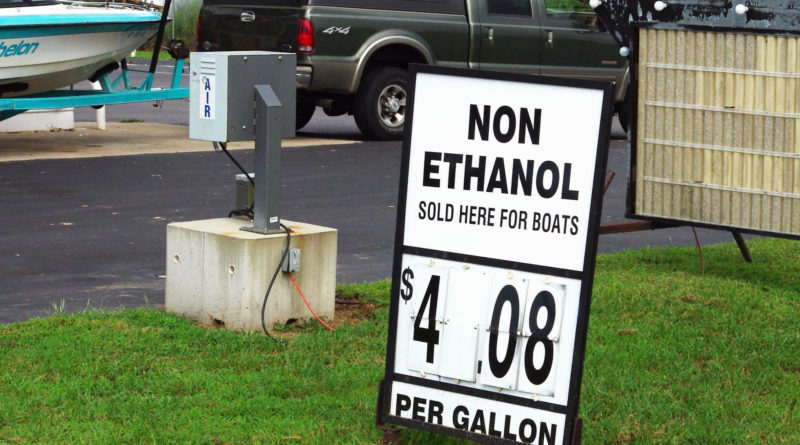 The EPA released its proposal for year-round sales of E15. Will Pres. Donald Trump’s campaign to make E15 fuels available for all 12 months be implemented by this summer? Or will boaters stop the campaign from moving forward? (Parimal M. Rohit photo)

WASHINGTON, D.C.—The Environmental Protection Agency, or EPA, will be hosting a public forum at the end of March to receive input on Pres. Donald J. Trump’s proposal to make fuel blends with 15 percent ethanol available year-round. E15 fuel blends are not available at gas stations during the summer months due to environmental concerns.

EPA officials also announced the proposed rulemaking would include regulatory changes to allow elements of the renewable identification number compliance system of the Renewable Fuel Standard (RFS) to be modified. Modifying the compliance system means the EPA could “enhance transparency in the market and deter price manipulation.”

Allowing E15 fuel blends to be available year-rounds means the EPA would have to do away with restrictions during summer months; those using the 15 percent fuel blend would be able to take advantage of the Reid Vapor Pressure (RVP) waiver between June and September.

“Consistent with President Trump’s direction, EPA is working to propose and finalize these changes by the summer driving season,” EPA Administrator Andrew Wheeler said in a statement. “We will be holding a public hearing at the end of [March] to gather important feedback.”

The public comment period is open through March 29, according to the EPA.

E15 sales are currently restricted by an RVP control, which prevents fuel blends with 15 percent ethanol from being sold between June and July. Trump, in October 2018, directed the EPA to look into allowing E15 sales for a full 12 months, replacing the current eight-month availability.

Allowing year-round sales of E15 fuels has been drawing mixed reactions. Corn farmers and convenience store operators have advocated for the fuel blend, calling it a cleaner fuel than the other year-round options available to boaters and drivers.

A vice president of a company operating more than 200 gas stations stated the summer moratorium on E15 sales was unfair and confusing to the consumer; his statements were made to a convenience store publication and cited in an article recently published by The Log.

“It’s so disruptive to try to sell a product for eight months out of the year. Let’s face it: There’s no other grade of gasoline that has that restriction,” Mike Lorenz, vice president of Sheetz Inc., was quoted as saying. “It’s extremely confusing for the consumer. That would be a huge win that we can sell it year-round like other grades of gasoline.”

The marine industry, however, has consistently pushed back on making E15 fuel blends available year-round. E15 blends, they state, damage engines and fuel systems. Manufacturers also void engine warranties if it is determined the boat owner filled up with E15 fuel.

Misfueling has also been an issue – where those filling up might not know they are pouring E15 fuels into their engines because of improper or absent labeling.

“The EPA’s legally questionable decision to allow year-round sales of E15 needlessly puts millions of American boaters – not to mention hundreds of millions of people with chainsaws, generators, and lawnmowers – at an increased risk of misfueling just so a powerful, politically important constituency can reap a financial windfall. NMMA is adamantly against this proposal and we encourage the administration to abandon this reckless policy,” Dammrich said in a released statement.

“EPA’s efforts to inform the public about the dangers of E15 are woefully inadequate, leading to consumers using incompatible fuels that destroy their products,” Dammrich continued.

A news report published by TheHill.com stated most fuels currently sold in the United States contain up to 10 percent ethanol – which is safe for marine engines. Only 1 percent of gas stations sell E15 fuel, the article continued.

Sales of E15 fuel blends are not permitted between June 1 and Sept. 15 of each year. Only vehicles with flex-fuel engines are allowed to fuel up with E15 during the moratorium.