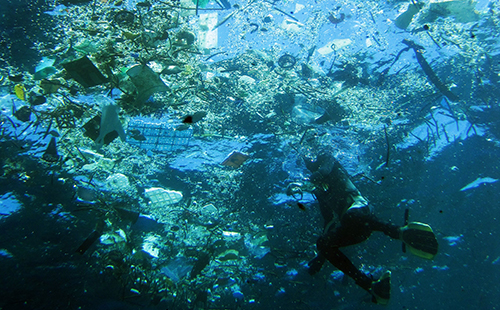 Legislative proposal would arm NOAA to respond to pollution emergencies in harbors, on coastlines.

WASHINGTON, D.C. — Marine debris from other countries is invading the United States.

A bipartisan effort is underway in Washington, D.C., to address marine debris along the nation’s coastline, as senators have begun weighing in on the Save Our Seas Act of 2017. The efforts do not call for a wall to be built.

The bill would authorize the White House to partner with other countries to prevent the flow of marine debris to the U.S. coastline.

“This bill encourages the Trump administration to forge alliances with these countries and to take a stand against the dangerous levels of debris in our oceans and make sure that they do not reach America’s coastlines,” Sullivan said in a released statement.

A majority of marine debris found on U.S. shores, according to S. 756, arrives here from other countries.

“Intact marine debris from foreign countries travel great distances and pose problems for nations who are not responsible for the mismanagement of the source country’s solid waste,” a statement issued from Sullivan’s office stated. “This is particularly true in the United States and Alaska whose shorelines require the constant cleanup of foreign-sourced marine debris.

“It is estimated that there is more than 250,000 tons of debris floating on the oceans’ surface,” Sullivan’s statement continued.

Gov. Jerry Brown could urge the NOAA administrator to declare a severe marine debris event should something drastic occur on California’s shores, according to the bill’s language.

NOAA’s Marine Debris Program would also remain in effect through the 2022 fiscal year, if S. 756 becomes law. The program supports research on the sources of marine debris and recommends preventative or cleanup action, according to the legislative proposal.

Sullivan’s bill also encourages the White House and U.S. State Department, according to S. 756, “to engage with the leaders of nations responsible for the majority of marine debris, examining the causes of ocean debris, effective prevention and mitigation strategies, and the economic benefits for treaty nations in addressing the crisis.”

Marine debris is broadly defined as a solid item found in our waters. Common forms of marine debris include plastic items, fishing gear, derelict boats, metals, rubber, paper or other pieces of trash or discarded materials.

In 2015 National Geographic published an article stating there was at least 5.25 trillion pieces of plastic debris in the world’s oceans, with only a small percentage of this figure actually visible on the water’s surface.

Congress established the Marine Debris Act in 2006 in an effort to address increasing amounts of trash found in the world’s waters. NOAA, according to federal law, also has an established Marine Debris Prevention and removal program “to reduce and prevent the occurrence and adverse impacts of marine debris on the marine environment and navigation safety.”

The bill was introduced in March and forwarded to the Senate’s Commerce, Science and Transportation Committee.