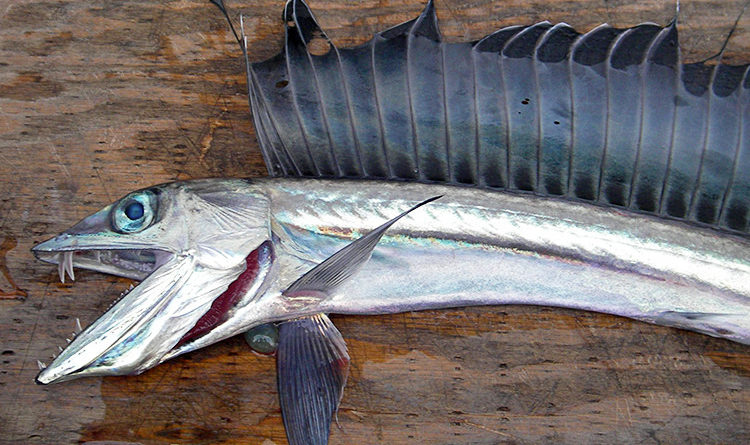 ALASKA—A fish described by the National Oceanic and Atmospheric Administration (NOAA) as a scale-less lizard and featuring “gaping fanged jaws,” “enormous eyes” and a sailfin could help reveal some secrets of one of the least known places on the planet: the ocean’s Twilight Zone.

Woods Hole Oceanographic Institute in Rhode Island describes the Twilight Zone as the “dimly lit” mesopelagic region of the ocean, which exists between 660 and 3,300 feet (200 to 1,000 meters) below the surface. The Twilight Zone is deep and cold, an area with little to no sunshine penetration, according to an article published in Woods Hole’s Ocean US magazine.

One of the fish calling the Twilight Zone home is the lancetfish, which can grow to be 7 feet long and migrates as far north as the subarctic areas of Alaska’s Bering Sea to feed, according to NOAA.

“Lancetfish are hermaphrodites, possessing both male and female sex organs simultaneously. Very little is known about lancetfish reproduction and development,” NOAA’s informational article on lancetfish stated. “[Its] flesh is watery and gelatinous and generally not appetizing to humans. However, other large predators like sharks, tuna, and fur seals—and other lancetfish—are not so picky.”

This would imply lancetfish are cannibals – and NOAA’s research would confirm such a theory.

“Lancetfish are notorious cannibals and also feed voraciously on many other fish and invertebrates,” NOAA’s informational article on the Twilight Zone fish species continued. “Many descriptions of new species of fishes, squids, and octopuses have been based on specimens collected by lancetfish and taken from their stomachs.”

NOAA added its scientists are studying the stomachs of lancetfish “to understand the mysterious midwater food web.”

Those scientists, speaking of food web, made an interesting observation about the lancetfish digestive system.

“Food in distensible lancetfish stomachs is often found in a nearly pristine state, barely digested,” NOAA’s informational article on lancetfish stated. “Scientists speculate that lancetfish may eat as much as they can whenever they find food, then digest it later when they need it.”