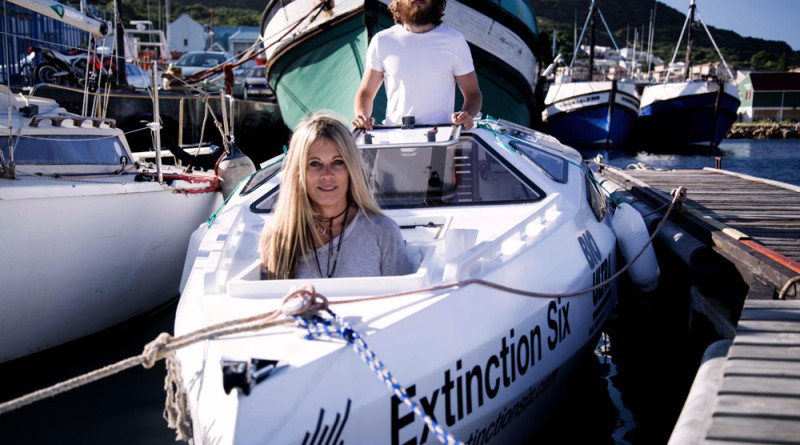 Robyn Wolff and Davey du Plessis, a mother-son team from South Africa, departed late last month on a 4,008-mile voyage across the Atlantic Ocean on a human-powered vessel. The duo will pedal the boat on an unsupported voyage that will take three to six months to complete.

Wolff, 50, and du Plessis, 27, are pedaling as part of The Atlantic Project, a journey from Cape Town, South Africa to Rio de Janeiro, Brazil to bring focus to the current mass extinction of many species, caused solely by human impact.

“We as a global society need to urgently and radically reassess our anthropocentric views, working towards eliminating our destructive, cruel and exploitative impacts on the natural world,” he wrote on his blog, daveyduplessis.com.

The boat was designed by USA based naval architect Dudley Dix and built in Knysna, South Africa by local boat builder Tertius du Pleases. The boat was built with FSC certified marine ply and the plant-based epoxy, ecopoxy.

If the crossing is a success the mother-son team would set the first human-powered ocean crossing to depart from South African shores; the first mother and son team and the first mixed team to pedal across any ocean; the first team of two to cross the South Atlantic under human power; and, the first team of two to cross the Atlantic east to west under human power from continent to continent nonstop. The attempt will also establish the duo as the third pedal boat to ever attempt an ocean crossing, according to du Plessis.

His previous expeditions include cycling across Africa in 2011 and navigating the Amazon River in 2012, when he was attacked and shot in the jungle. His story is told in his book, Choosing To Live.