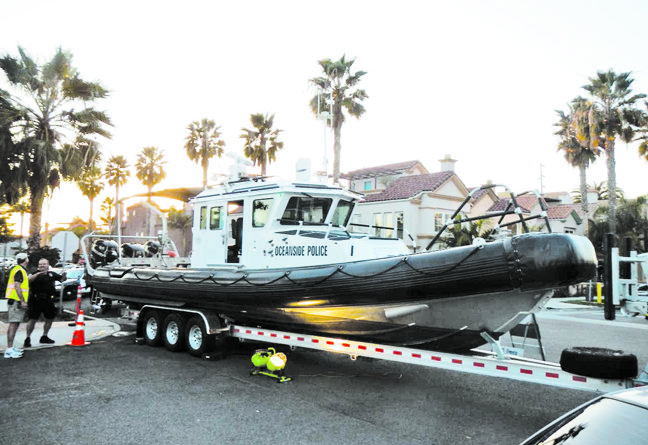 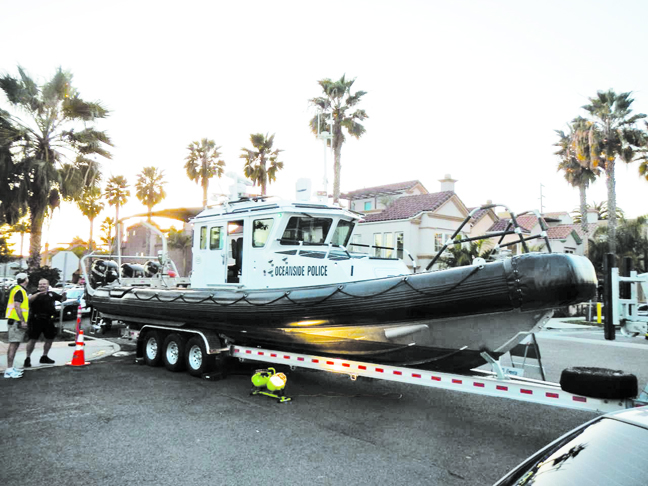 OCEANSIDE — A new patrol boat will soon navigate Oceanside Harbor, as the Oceanside City Council unanimously approved funding for Harbor Patrol to replace an outdated boat.
Oceanside Police Department will receive a $500,000 loan to purchase the new vessel for its Harbor Patrol and update its fleet, which includes a 29-foot Crystaliner acquired in 1984 and used for enforcement and rescue operations.
According to Capt. Fred Armijo, the funding would be used to replace the 29-footer, which had a recommended lifespan of 20 years.
“We are now in year 30 with this vessel. It was built by the manufacturer for a 20-year lifespan,” Amijo said. “This vessel is in need of replacement.”
There are two other Crystaliners in the Oceanside Harbor Patrol fleet, including a 21-footer purchased in 1985 and primarily used by volunteers as well as another 29-footer acquired in 2002.
Harbor Patrol also has a 35-foot SAFE (Secure All-around Flotation Equipped) boat, which was added to the fleet in 2012 and is primarily used in drug interdiction and human trafficking operations.
Funding for the new patrol boat will come from Oceanside’s Fleet Management Fund, which currently has about $17 million in the back, and would be repaid by the harbor within the next 20 years. With interest at 1.1 percent, Oceanside would receive $560,060 from the Harbor Fund by the end of the 20-year amortized loan.
The Harbor Fund is made up of income generated from users of Oceanside Harbor, such as parking and slip rental fees. City Manager Steven R. Jensen said slip rental fees make up about 75 percent of the fund, with most of the remaining 25 percent coming from parking fees and rents of the harbor’s commercial tenants.
Looking ahead, council members were a little concerned about spending $500,000 on a new patrol boat, considering another request could be in order in the next seven or eight years when the 2002 Crystaliner turns 20 years old.
Seeking to be prepared for a Harbor Patrol request to replace the 2002 Crystaliner in 2022, Amijo and Oceanside Police staff requested the council contemplate setting up a vehicle replacement fund.
The vehicle replacement fund was not established as part of the council’s Nov. 19 vote. However, if the fund were established, Oceanside Police staff said it would need $64,540 annually – $32,270 per boat – to ensure the city has enough money to pay for two boat replacements and make interval repairs during the life of the vessel.
Aiming to avoid a situation where no money would be available to pay for a new boat or having to take funding away from another capital project, the replacement fund also sought to have enough financing available to pay for three engine repowers and three electrical overhauls during the life of the patrol boat.
As for what happens with the old patrol boat once the new vessel arrives, Armijo said the fate of the 1984 Crystaliner is uncertain.
“We might not be able to sell them outright and recover monies,” Armijo said. “Two of the three rescue boats that we do have are tied to grant funding. So we will have to maneuver our way through that process with the granting agency for disposal purposes. We would have to go back to the granting agency.”
Councilman Jack Feller said before the vote he hoped the 1984 Crystaliner would ultimately not be sold to someone who would use it for a liveaboard.
In October, the Oceanside Harbor and Beaches Advisory Committee unanimously supported a plan to seek a $500,000 loan to replace the 1984 Crystaliner.
The council’s vote was 4-to-0; Councilman Jerome M. Kern was absent from the Nov. 19 meeting.