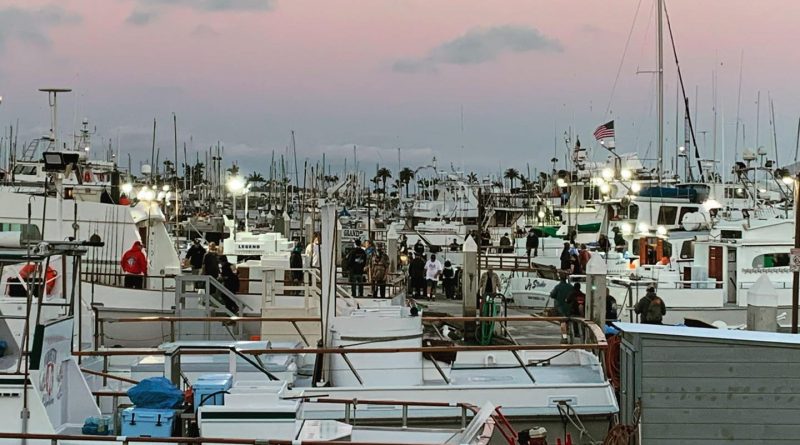 The California Air Resources Board is proposing new regulations that would require commercial passenger fishing vessels such as these upgrade their engines in a phased-in approach starting in 2023; roughly 2,000 people have signed a petition arguing the regulations would put many operators out of business. H&M Landing Facebook photo

SACRAMENTO— The California Air Resources Board has proposed new regulations that would require the harbor craft sector to upgrade diesel engines with newer, cleaner technologies starting in 2023 in a phased-in approach based on the engine’s age and current engine type.

The petition so far has garnered about 2,000 signatures, according to SAC Executive Director Ken Franke.

“The rulemaking will simply make it to where we cannot comply and what CARB says is if you can’t comply, retire the vessel,” said Frank Ursitti, a managing partner of H&M Landing in San Diego, which has a fleet of 32 vessels, all independently owned and operated.

The new regulations were released in April and are aimed at attaining regional air quality standards and reducing community health risk, according to CARB.

Under the proposed regulations, all harbor craft, except commercial fishing vessels, would be required to upgrade to a U.S. EPA certified marine tier 3 or tier 4 engine plus a diesel particulate filter between 2023 and 2030. The DPF is meant to modify engines to meet CARB performance standards.

The draft proposal requires the commercial fishing sector upgrade to tier 2 or newer engines between 2030 and 2032. CARB staff said in an email one factor for proposing less stringent emission requirements for commercial fishing vessels in the industry has less of an ability to pass costs onto the consumer than other categories that are able to establish prices for their services.

A 2019 Cal Maritime study that evaluated the feasibility and costs of installing tier 4 engines concluded tier 4 engines do not exist for commercial fishing or commercial passenger fishing vessels. The study also said retrofit with a DPF and/or diesel engine fluid system would have adverse effects on vessel stability and would reduce passenger count by eight to 30 persons. The retrofit would also need to get U.S. Coast Guard approval for safety.

Ursitti said they have already begun discussing how this proposed regulation would impact the cost of tickets if these vessels were to retrofit with a tier 3 engine and DPF.

“For an entry-level ticket price, raise that ticket price right out of the gate in excess of 25 percent,” said Ursitti.

He said to completely replace a vessel, they would need to increase ticket prices by 60 to 70 percent.

“So again, you just run yourself right out of business,” said Ursitti.

The CARB board is scheduled to vote on this proposed regulation at a public hearing set for Nov. 18 and 19, after a 45-day comment period that will start on Oct. 1.

CARB staff said they are continuing to consider stakeholder feedback and are working to balance economic impacts with the need to achieve greater public health protections by improving air quality.

According to SAC, prior to the COVID-19 pandemic, recreational fishing contributed $5.6 billion a year in economic activity and supported nearly 40,000 jobs.

Franke said while most harbor crafts are owned by big corporations or port authorities, sportfishing and whale watching boats are family-owned businesses that operate on a small profit margin. He said these regulations would put many of them out of business in three to six years, it would substantially increase the price of passenger tickets, and limit access to saltwater fishing, whale watching, and children’s science trips.

“In my time here at SAC this is the most serious issue we have ever faced,” said Franke.

He also noted the proposed regulations were not developed in consultation with the USCG, which is charged with regulating the safety of commercial passenger vessels.

“It’s not that they don’t want the rule, it’s that it should be such that people can actually comply,” said Franke.

Those in the industry say they have already been proactively and voluntarily upgrading their engines to tier 2 and tier 3 over the past 15 to 20 years as the technology becomes available with the help of funds from the Carl Moyer Program, which is a voluntary grant program that provides funding to accelerate the replacement of older diesel engines with cleaner technologies. Franke estimated most of the commercial passenger fishing vessels in the state currently have tier 2 engines.

Ursitti, who has previously owned multiple sportfishing charter vessels, said he himself has used the Carl Moyer Program for three repowers.

There was also concern that once these deadlines are mandated, grant funds would not be available.

“If this rule goes through there’s a real serious question as to whether or not they’ll ever be able to have grant money pay for a portion of these engines or not,” said Franke.

“I think the hard questions need to be asked,” said Ursitti.

According to CARB, there are about 352 commercial passenger fishing vessels statewide and a total of 3,153 harbor craft vessels encompassed by these regulations.

CARB staff said they are finalizing emissions, air quality, economic, and health benefits analyses and those will be part of the rulemaking package anticipated for public release in September 2021.

“We hope the Newsom administration sees this as a priority in rebuilding tourism and also continuing to make the ocean accessible to diverse and lower economic communities, we want to be willing partners, this fleet has a long history of working well with the state and it’s an economic engine to the entire coast that we hate to see ruined,” said Franke.