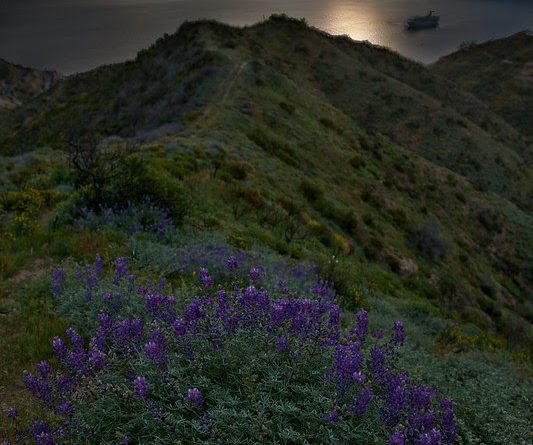 AVALON—April showers bring May flowers and this year, April distance brings May existence. The old cliché is ringing true on Catalina Island, which has exceeded 10 inches of rain so far this season. The Catalina Island Conservancy said the island’s flora is thriving thanks to the rainfall.

“Every living thing on this island is affected by rain, and this season shows how true this is. After a fantastic rain season, the Island is green and lush – certainly by Catalina standards,” Catalina Island Conversancy said in an email on April 9.

The COVID-19 pandemic has also brought another reality; areas which would normally have a heavier human footprint have gone quiet.

“Both the Safer at Home Order and above average rainfall in March and April are likely influencing some animals’ behavior as they congregate in areas they would either typically avoid during busier tourism season or areas that are unusually lush this time of year,” Conservation Operations Director Laura Minuto said in an email.

Catalina Island is home to more than 60 plant and animal species found on Catalina and nowhere else in the world. While traveling restrictions are in place, live webcam videos, including one underwater at USC Wrigley Catalina Marine Reserve, one with views of the harbor and an eagle cam are keeping island lovers connected to Catalina’s wildlife.

Fans of the bald eagle cam in Two Harbors also have a new resident to watch. On April 5, eagles Chase and Cholyn became parents as a baby eaglet emerged.

It’s unclear when the island will welcome back visitors, but Catalina Island Chamber of Commerce & Visitors Bureau launched a video campaign called “No Man is an Island” to let visitors know they are missed. They also created a landing page, https://www.catalinachamber.com/love-catalina/, so island lovers can experience Catalina virtually until visitors allowed again. It includes links to the mentioned webcams; educational resources for kids from the Catalina Island Conservancy including wildlife coloring pages; and exhibition archives from the Catalina Island Museum.

“We are here taking care of the Island as it begins to burst into bloom. These species, and so many more, will be here waiting for your return,” Catalina Island Conversancy said in an email on April 9.