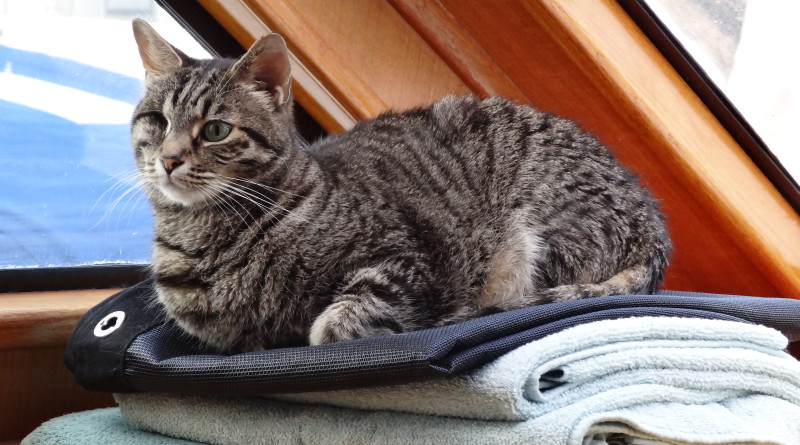 He was the unlikeliest of boat cats, a brave stray kitten found crying under a bush in a rough part of town by a kind lady holding a spay and neuter clinic. Candy Schumann, co-founder of San Diego’s Spay & Neuter Action Project, described Alexander as “a purring mushball,” eager for cuddles more than food, even though he’d clearly been abused and starved. She fostered him in her home, where he was returned once after an unsuccessful adoption for being “too friendly.”

Now we’re grieving over our invariably kind and loving Alexander’s loss. After 13 years of mutually devoted companionship, we said goodbye April 3, when cancer overcame his fierce will to live.

Arv and I met Alexander when we went to adopt a kitten, now Amy, and felt she needed a companion. I’d wanted a long-haired cat, but then I met wise Alexander (a short-haired gray tiger and the most loyal of cats) when he jumped into my lap.

He looked longingly at me with his big green eyes as if saying, “I know you’re not considering adopting me, but won’t you take me home with you?”

The following day we brought Alexander and Amy home and never looked back. As Amy glommed onto Arv, Alexander claimed me as his very own. Because of his traumatic beginning, we gave him a special name, “Alexander” for Alexander the Great and “Well-Beloved” to proclaim his new status. Later we declared him “Admiral of the Fleet.”

I often joke that we bought our current boat for the kittens. We’d both become so attached to them we didn’t want to leave them home. Our old Hatteras offered no safe place for them.

Once we found our current Viking, with space for their own stateroom for safety underway, we equipped the boat with cat-proof screens and feline essentials.

We first brought them aboard on Thanksgiving weekend 2008, with tantalizing roast turkey aromas. Initially frightened, they adapted within a day. While Amy accepted living aboard, Alexander adored everything about the boat – except being trapped and plunked into a carrier for the trek to and from our marina.

To reassure them they weren’t headed for the vet, we purchased special rolling fleece-lined carriers we dubbed “boatotes.” We put them out beforehand so they’d know where they were going. Still Alexander would hide, exhibiting his camouflage skills. Once when we were going home and couldn’t locate him, I found him hiding in plain view on a bunk, curled within a coil of black wire, disguised by his tiger stripes. In later years, he’d hide in a favorite closet where he knew I’d find him to whisk him to his beloved boat.

On board he loved to sit up high, watching for birds, other wildlife and dock activity, or lounging in a sun puddle or on his heated fleece throw. He nurtured an unusual relationship with a night heron who perched on an adjacent boat’s railing while the two communed silently through the window. His fishing pole, catnip banana and crinkleballs remained favorite toys throughout his too-short life.

Alexander, always a cautious cat, was a superb judge of people, venturing out when we entertained only when he sensed he was among friends.

Losing an eye to melanoma of the iris rendered him still more careful.

While I miss his presence in my lap, I miss him most in the galley. Alexander, with his discerning palate, was my gourmet, showing appreciation for his favorite foods, ahi, shrimp, turkey, roast pork, carne asada and, yes, tamales (real lard only, please!).

Alexander, you will always live in our hearts and on your boat.