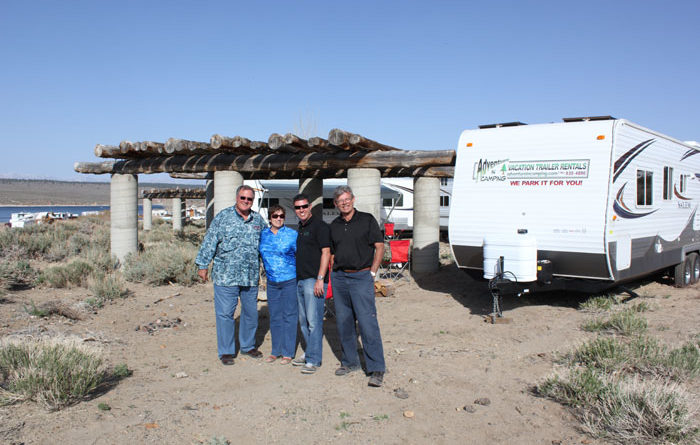 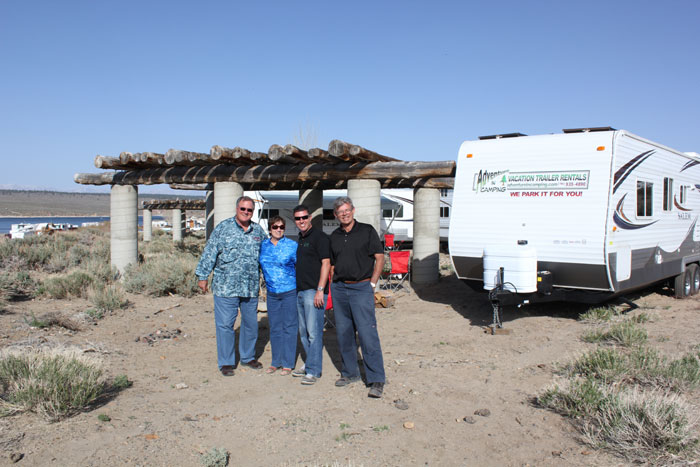 We had never used their services before, so I was apprehensive. But I called around to folks I know up there, and I got glowing recommendations about Adventures in Camping.

I told them I needed to be at Lake Crowley on the Friday night before the trout opener on Saturday. We drove up in three vehicles at different times because of our work schedules: Ginny and I in one car, Travis and Lori Hall and my grandchildren Hannah and Hunter in another, and Morgan and Katie Hall and grandchildren Aiden and Samantha in the third car.

Ginny and I got there first, before it got dark. I was amazed: Adventures in Camping had arranged three travel trailers in a semi-circle near an open air concrete gazebo, about 50 yards from the water on a slightly elevated bluff.

Each travel trailer had artificial turf spread out in front, with four comfortable folding chairs holding down the corners. Each trailer had a generator and backup gasoline. They had built a fire pit and filled it with firewood. It was awesome.

As the sun set, we lit the fire, started cooking dinner and waited for the kids.

They each pulled in within a half hour of each other, unpacked the cars, set up the inside of the trailers to their liking and settled down by the fire. Dinner was served, and we settled in for three nights of the most fun camping we have had in a long time.

The next morning, we got up later than usual because we only had a few hundred yards to walk to get to the boat dock at Crowley Lake, where our pontoon boat was waiting. We fished all day and had a pretty good day — especially later in the afternoon, when it got really “wide open.”

At certain points, we would let different people on and off the boat, so they could go to the trailer or come back. After docking the boat and cleaning the fish, we walked the short distance back to our campsite and settled in for the evening. Some friends came to visit, and beverages and cigars were exchanged when the kids went to bed.

I get 30 miles per gallon in my VW Tourareg TDI. If I had hauled a trailer up there, it would have cost me more than what it cost to have Adventures in Camping come set up their trailers.

This is easy, comfortable and affordable. I recommend Adventures in Camping extremely highly. They can set up virtually anywhere in the Eastern Sierra.

You can’t miss them at the shows. They are on the corner of the 100 aisle in Long Beach (the Eastern Sierra Aisle) and on the main aisle in Del Mar.

Check ‘em out. You won’t be sorry.