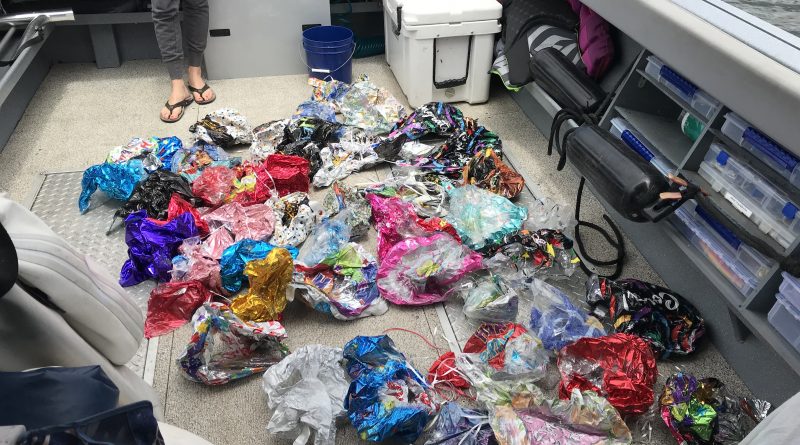 Julia Chambers, 12-year-old member of a boating family, pens a short editorial about mylar graduations balloons found in the water between the mainland and Catalina Island.

SOUTHERN CALIFORNIA— As we motored home from a weekend trip at Santa Catalina Island, we came across a mylar graduation balloon floating away with the tide. It wasn’t too shocking, as we normally found one or two balloons on trips like this. However, in the next two hours, we came across fifty more balloons scattered across the surface, one floating in the center of a dolphin pod. Even more shockingly, we learned that many other boats had also collected an extensive amount of balloons.

When most people release a balloon (or balloons) into the air, it never crosses their mind that the balloon will eventually come down, usually in the middle of the ocean. Mistaken for food, these balloons are consumed by sea creatures, and the balloon slowly and painfully kills them. Even ‘biodegradable balloons’ still take years to break down, and in that time, the balloon will have likely already been consumed. Even worse are the mylar balloons, made out of synthetic nylon material coated in metal, and causes pollution when the metal flakes off. The production of making mylar balloons is extremely pollutant, and they will never biodegrade, which means that if they are not consumed by animals, the balloons will be sitting at the bottom of the ocean hundreds of years longer than the releaser of the balloon will live.

Is all this really worth one moment of celebration? Is it worth the death of a being in this world?

2 thoughts on “Editorial: Balloons Floating Away with the Tide”