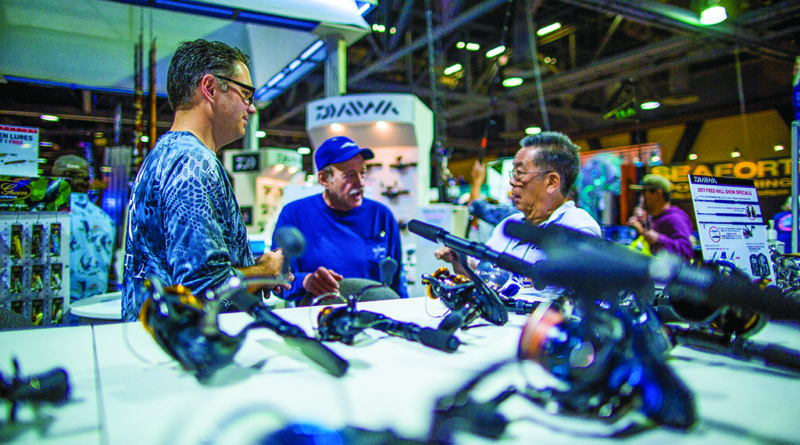 LONG BEACH—The Long Beach Arena and neighboring Convention Center will become a paradise for fishing, boating, camping and hunting enthusiasts, March 4-8, as the Fred Hall Shows returns for 2020 with its flagship event in Southeast Los Angeles County. The show returns for its 74th year.

Anglers, boaters, campers and hunters alike will be filling the floors of the arena and convention center in search of the latest offerings on fishing tackle, boats and other gear, products and services.

Penn presents a pre-show seminar at 11 a.m. on March 5. The seminar, called The Captain’s Summit, will feature six captains talking about the latest local fish species, rod and reel selections, hook styles and sizes, knots, fishing seasons and more. The seminar is two hours long and is open to the first 150 people who buy a ticket. An adult ticket is $35; children tickets are $10, each. Angler Steve Carson will moderate the session; sitting on the panel are Captains Art Taylor, Bob Hoose, Mike Lackey, Ray Lopez, Andrew Voila and Rene Monteagudo.

Surf Fishing from California to Cabo is another pre-show seminar, and will be presented by the Coastal Conservation Association (California). Bill Varney, Corey Sanden and Wesley Brough will talk about bait, equipment, rigging and surf fishing techniques. Raffle prizes will be available during the seminar, which will be held from 11 a.m. to 1 p.m. on March 6. Tickets are $35 for adults and $10 for children. Only 150 spots are available. Tickets must be bought online, as no sales will be made on-site.

Attendees will be able to take their pictures with a giant trout at the Mammoth Lakes booth.

Those attending the Long Beach show can also attend seminars, including one on surf fishing along the California and Baja coasts and another on Eastern Sierra Trout Fishing Techniques.

The complete schedule of seminars and other information about the Long Beach show can be found online at fredhall.com/long-beach/.

Del Mar will host the final Fred Hall Show of 2020, with anglers, boaters and other outdoor enthusiasts expected to pack the local fairgrounds between March 26 and 29.

The Long Beach iteration of the Fred Hall Shows is the “granddaddy of them all,” celebrating its 74th year come March 4. Del Mar’s show, which will be held at Del Mar Fairgrounds just north of San Diego, is celebrating its 44th year.

Hundreds of free seminars, geared to anglers and outdoors enthusiasts of all experience levels, will be featured at both shows.

The Fred Hall Show, which is presented by Progressive Insurance, is the largest consumer fishing show in the world – showcasing more boats, more shooting sports gear and more travel and vacation opportunities than you are likely to see anywhere else.