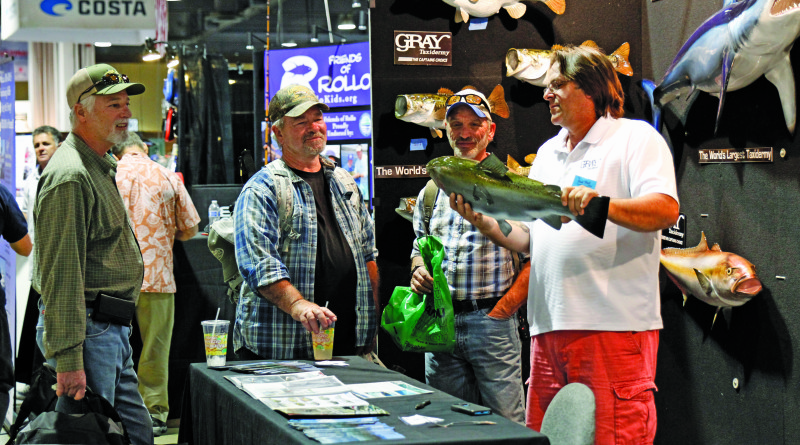 Outdoors enthusiasts will fill the Long Beach Convention Center, March 6-10, for the latest in fishing and boating.

LONG BEACH—The Long Beach Arena and neighboring Convention Center will become a paradise for outdoor enthusiasts, March 6-10, as the Fred Hall Shows returns for 2019 with its flagship event in Southeast Los Angeles County.

Anglers, boaters and hunters alike will be filling the floors of the arena and convention center in search of the latest offerings on fishing tackle, boats and other gear, products and services.

The Log and FishRap will be giving away daily prizes at the Long Beach and Del Mar shows. Daily prizes include rod and reel combos, lures, jigs, shirts, Duffy boat rentals, tow memberships and tackle boxes. Contestants can enter their names for prizes at The Log/FishRap booth at both shows.

Attendees at the Fred Hall Shows at Long Beach and Del Mar are eligible to enter for this year’s grand prize: a Riviera Paddlesurf Standup Paddleboard.

Those attending the Long Beach show can also attend seminars, including one on surf fishing along the California and Baja coasts and another on Eastern Sierra Trout Fishing Techniques.

The complete schedule of seminars and other information about the Long Beach show can be found online at fredhall.com/long-beach/.

Bakersfield picks up almost immediately where Long Beach will leave off, as Central California hosts the second of three Fred Hall Show events in March. Doors for the Bakersfield show open March 15; the show will continue through March 17. The exposition is officially known as the Fred Hall Central Valley Sports Show.

Fred Hall’s Central Valley Sports Show has also been around for about 40-some years – but is a relatively new addition to the Fred Hall lineup.

Del Mar will host the final Fred Hall Show of 2019, with anglers, boaters and other outdoor enthusiasts expected to pack the local fairgrounds between March 28 and 31.

All three Fred Hall Shows are hailed as the “ultimate outdoor experience.” The Long Beach iteration is the “granddaddy of them all,” celebrating its 73rd year come March 6. Del Mar’s show, which will be held at Del Mar Fairgrounds just north of San Diego, is celebrating its 43rd year.

Hundreds of free seminars, geared to anglers and outdoors enthusiasts of all experience levels, will be featured at all three shows.

The Fred Hall Show, which is presented by Progressive Insurance, is the largest consumer fishing show in the world – showcasing more boats, more shooting sports gear and more travel and vacation opportunities than you are likely to see anywhere else.