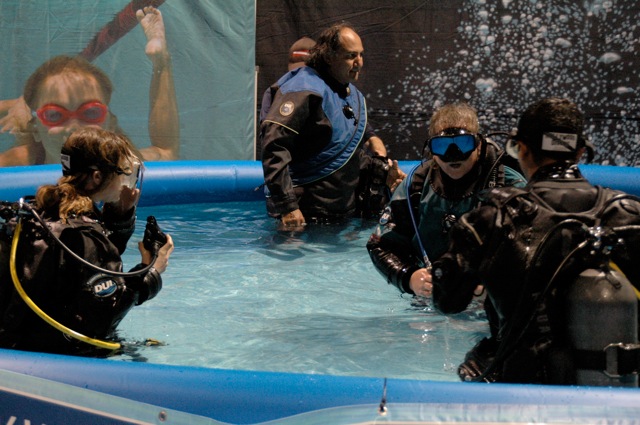 About two years ago a big crossover started taking place.  That was the crossover from surfing to free diving.  About 12 months ago it just got “blown up”.  According to some observers the beginning of this new crossover which now includes Stand Up Paddle boards, was when Mark Lazano, owner of Freediving Instructors International began his Waterman’s Survival Course.

The course was eagerly adopted by legendary Hawaiian “big wave’ surfers like Garrett MacNamara and Jamie O’Brien (and contemplated by Mark Healey).  They were able to expand their abilities to hold their breath under water by an amazing factor.  Mark is a great instructor and has taught thousands of people how to expand their capacity for holding their breath.  Of course, for big wave riders this can be a life-saving ability.

But that ability has led to the crossover sport of free-diving and spear-fishing from surfboards and SUP’s.  Mark Healey is even sponsored by Rice, one of the leading spear-gun manufacturers.  And for the second year in a row, at the Fred Hall Show…The Ultimate Outdoor Experience free-diving is becoming a much bigger part of the show with multiple spear-gun and SUP companies taking large displays.

Of course, the entire “Dive” section of the Fred Hall Shows is headed by Jonathan Hall and his crew at Deep Blue SCUBA and Swim center.  And we have a new dive pool. It is longer, wider and deeper.  You can go into the Deep Blue SCUBA and Swim Center booth, go into the dressing room, put a “dry suit” on over your clothes, enter the pool, get your first SCUBA lesson, exit the pool, take of the dry suit and continue on around the show.

And again this year, Jonathan Hall has devised a way to test fire spear guns underwater at fish targets.  This is amazing!  Many spear-gun companies will be at the show and some of them will be able to be tested in the tank.

Mark Lazano, himself, will be there with his instructors and they will be giving “breath hold” demonstrations in the dive tank.  You can literally double your ability to hold your breath after just a few minutes with the instructors from Mark’s group.

Jonathan is very excited about this year’s show because he will be demonstrating the “re-breather” apparatus that will free divers from using a tank.  Jonathan believes that this is the future of diving.  Stop by the booth and get infected with his enthusiasm.  March 5-9 at the Long Beach Convention Center.