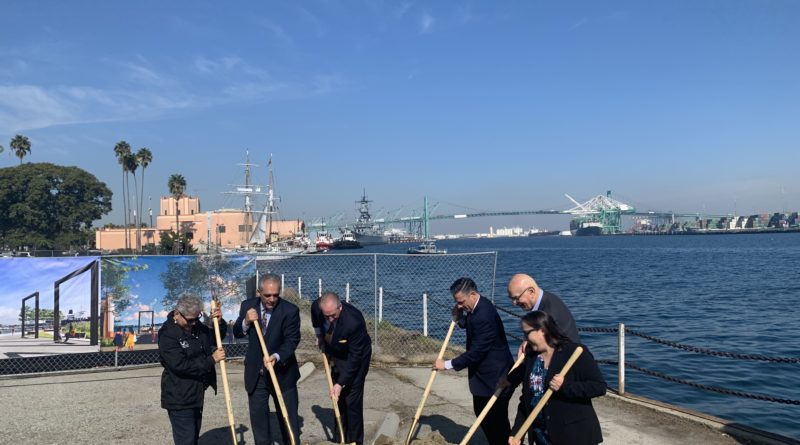 A groundbreaking ceremony held on Jan. 27 marks the start of construction for one of the LA Waterfront revitalization projects in San Pedro; a future neighboring project includes slips for boaters.

LOS ANGELES—Shovels have hit dirt, marking the start of construction on the San Pedro Promenade and Town Square Project, which are part of the larger redevelopment of the LA Waterfront, which encompasses 400 acres of Port of Los Angeles property in San Pedro and Wilmington.

“We are breaking ground on what will become the front door of our new LA Waterfront,” said Los Angeles City Councilman Joe Buscaino at a groundbreaking ceremony held on Jan. 27.

The Town Square project will transform a four-acre lot at 6th Street and Harbor Boulevard into an outdoor space for the public to enjoy views of the bustling port with harbor swings, seating, landscaping, architectural finishes and lighting.

The new segment of public promenade being constructed will run parallel to the Port’s Main Channel for about 1 mile meeting the new Town Square. It is expected to be completed in summer 2021.

“Just imagine the place where we stand today and extending a mile to the south of us will soon provide the public with an unprecedented view of the number one container port in the Western Hemisphere,” said Port of Los Angeles Executive Director Gene Seroka at the groundbreaking.

The Port of Los Angeles is funding the $33 million project, which will connect San Pedro’s Downtown Harbor to the future San Pedro Public Market development. The Port District hopes the projects will help transform the waterfront area into a visitor-serving destination which embraces the existing authentic character of the Port of LA as a working waterfront and bustling industrial port.

“This will be the place for visitors and residents alike to take in all the beauty of our working port,” said Los Angeles Harbor Commissioner Anthony Pirozzi, Jr. at the groundbreaking.

The San Pedro Public Market project, another major piece in the revitalization of the LA Waterfront, will break ground in the spring with completion anticipated in fall 2021. At the Jan. 23 Los Angeles Board of Harbor Commission meeting, commissioners gave unanimous approval to issuing an appealable Level II Coastal Development Permit (CDP) to the San Pedro Public Market LLC (SPPM) for Phase 1 of the project.

The $150 million San Pedro Public Market project will cover 42 acres, along the west side of the Los Angeles Harbor Main Channel. The area encompasses the old Ports O’ Call marina and village, where boaters leasing slips were forced to vacate years ago for the redevelopment. Right now, the area is mostly open space blocked off by chain link fence with no trespassing signs. According to the project website, plans for the space include 600-feet of courtesy boat slips, a food hall, a 6,000-seat open-air amphitheater concert venue, outdoor public spaces, an outdoor garden with shipping container kitchens and games, retail and maritime-related offices.

The project is a public-private partnership between the Port of LA, the Ratkovich Company and Jerico Development.

“This waterfront project designed by a group of world class talents will offer guests unprecedented access to LA’s waterfront and an experience that is unique to Southern California,” said San Pedro Public Market Developer Wayne Ratkovich at the Town Square groundbreaking.

According to a report presented to commissioners at the Jan. 23 meeting, phase one of the San Pedro Public Market development will include 100,000 square feet of restaurant space, 40,000 square feet of retail, and 30,000 square feet of maritime-related office uses. It will also include replacing and restoring the existing over-the-water wharf structures and floating docks at berths 76 and 77 and creating new floating decks for commercial sportfishing, whale watching, harbor cruises, water taxis and related water-adjacent tenants.

Plans to redevelop the area have been around since 2016.

“We’ve finally reached that pivotal point in this long process, we are actually going to build something,” Buscaino said at the groundbreaking.

It was also announced at the Jan. 23 Harbor Commission meeting, Executive Director Seroka has approved a Level I CDP to demolish three buildings located at Berth 44, which will make way for Bellwether Financial Group to develop a new state-of-the-art shipyard facility, dubbed LA Shipyard.