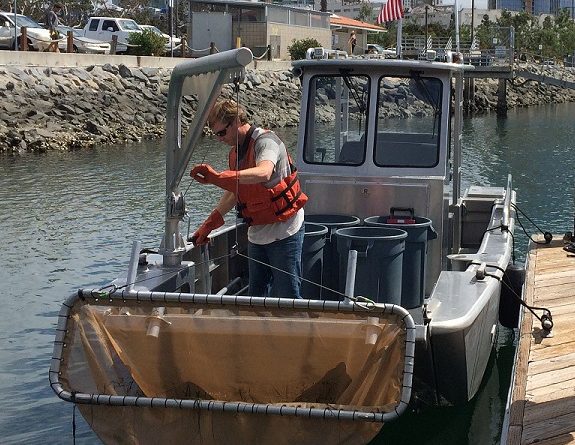 Commissioners agree to supply automated trash project with up to $100,000 for one year.

SAN DIEGO — A one-year pilot program proposing to remove marine debris from the Port of San Diego’s waters earned the support of the port district’s Board of Port Commissioners, Jan. 9.

Commissioners specifically approved a resolution to fund Zephyr Debris Removal’s one-year pilot program for up to $100,000.

The marine debris vessel is one of four pilot project proposals for the Port of San Diego’s “blue economy” incubator, which were approved by the Board of Port Commissioners. The other proposals approved by the port district, as part of it second round of consideration, will focus on the development of oil sensor technology, an ocean monitoring platform and offshore aquaculture infrastructure.

Malcolm added the pilot projects would also be good investments for the port district, as funding proposals for marine debris removal, boat washes and ocean monitoring would benefit the local environment while also yielding profitable returns.

“It’s the right thing to do. I think more governmental agencies should be doing the kinds of things that we’re doing,” Malcolm said.

Similar blue economy initiatives in place at the Port of Rotterdam in The Netherlands, Port of Seattle, Humboldt Bay Harbor in Northern California, Port of Ventura and Port of Los Angeles, according to port district staff.

“Ports are indeed at the forefront of challenges and opportunities of a growing blue economy and uniquely positioned to play a leadership role to support ocean entrepreneurs who are developing sustainable aquaculture and blue tech businesses,” LeBlanc told commissioners.

The port generally partners with organizations such as NOAA, Scripps, The Maritime Alliance, CleanTech San Diego and UCSD in pursuing blue economy initiatives.

A drive-in boat wash developed by Rentunder is also on the clock, according to port district staff. The 2-year pilot project would demonstrate innovative technology for in-water hull cleaning, LeBlanc told commissioners. Water quality testing and monitoring will also be conducted as part of the project.

LeBlanc also highlights a mobile application for local marinas, developed by Swell Advantage as part of its pilot program.

The app would, according to LeBlanc, “automate and optimize the management of the marina,” specifically help managers with slip allocation and boater communications.