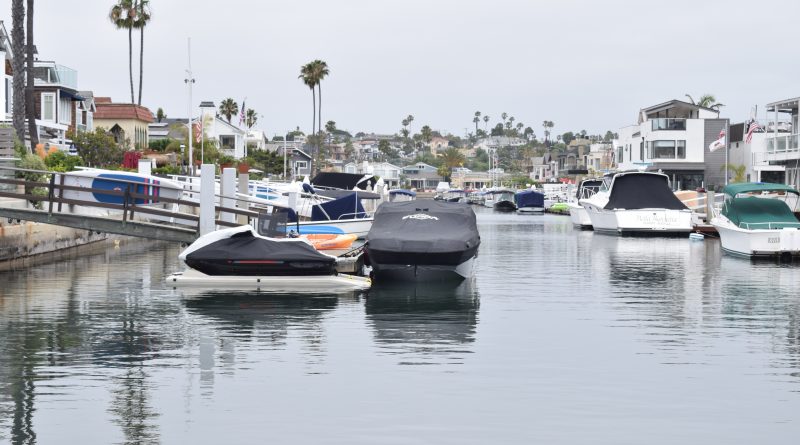 The June meeting was the last for Commission Chair Paul Blank, who has served eight years on the Commission.

NEWPORT BEACH—The Newport Beach Harbor Commission held its first meeting in three months on June 10. The April and May meetings were canceled due to coronavirus health concerns. The commissioners and public were given the option of attending in-person or by video conference – all commissioners chose to attend in-person.

On the docket was a public hearing on a residential dock reconfiguration at a property on the Rialto Channel on 36th Street. The proposed project would reorient the position of the float as well as shift the entire structure to the north and reduce the square footage. Since the applicant proposed a new configuration of the dock and it is not a like for like design, under Council Policy H-1, the Harbor Commission is required to hold a public hearing and vote on a recommendation.

Commissioners Bill Kenney and Ira Beer raised concerns about the reconfiguration allowing for a larger boat, which they believed could impede on the safety in channel, and suggested a provision be added that would limit the boat size at the property.

However, some commissioners, including Marie Marston, argued it would set a precedent for future projects in the channel.

The commissioners ultimately voted 4-3 to approve the project with a condition stating no vessel may extend past the bulkhead line more than 40 feet.

Commissioners also reported on progress on the commission’s 2020 Objectives. Commission Chair Paul Blank said in an email despite no commission meetings, various subcommittees have been meeting over the past three months. He said progress has been made on several objectives including reviewing and revising the Marine Activity Permits section of the Harbor Code, dredging and the harbor attendance study.

Harbor Master Kurt Borsting also shared some insight on harbor happenings during the months of on March, April and May.

Borsting also reported the Harbor Department is exploring the possibility of reinstalling approximately 20 solar lights on various markers in the harbor. The lights were installed as part of a local Eagle Scout project and were popular among the local boating community. However, they were removed after the department learned the equipment did not meet U.S. Coast Guard specifications.

Two new, improved fixtures believed to meet the Coast Guard requirements have been purchased as test units, and will soon be installed on a trial basis. If the test installation is successful, Borsting said the Harbor Department will re-submit a formal request to the USCG, allowing the lights to be installed throughout the Harbor.

Borsting also reported the Harbor Department assisted four local off-shore mooring permittees who took part in the voluntary vessel turn-in program (VTIP). The program is part of the California Division of Boating and Waterways and funds the disposal of older unwanted boats, as a proactive way of addressing vessel removals prior to their creating risk of environmental concerns. Borsting said the Harbor Department will soon start a round two effort with additional boat owners who have expressed interest in the VTIP program.

The June 10 meeting was final one for Blank as a commissioner; his term ended in June. He served eight years on the commission.

“The experience has been eye opening, educational, tedious in some cases, but overall very satisfying,” Blank said at the end of the meeting. “The harbor is cleaner, safer and enjoyed by many more people on frequent basis.”

He was acknowledged by many city staff members and commissioners for his guidance, light spirit and knowledge.

“Just a pleasure to be around and thank you for all the years you’ve dedicated to the harbor, you will certainly be missed,” Commissioner Scott Cunningham said.

The City Council has appointed Gary Williams Jr. to fill the vacant seat; he will begin serving in July. The Commission will appoint a new chair at their July meeting.