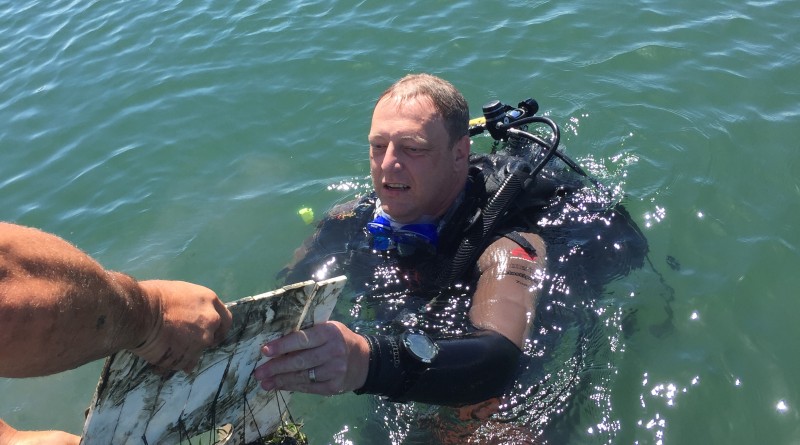 A diver receives a slate of eelgrass that will be planted in Upper Newport Bay. Orange County Coastkeeper led the planting process where almost 1,300 square meters of eelgrass were planted in the bay.Parimal M. Rohit photo

Environmental organization has been planting eelgrass beds in protected waters since 2012.

NEWPORT BEACH — The waters of Upper Newport Bay Ecological Reserve in Newport Beach continue to be filled with blades each summer. Blades of eelgrass, that is.

Teams of aquatic and land-based volunteers started the planting process on June 29 and continued work in batches through July 23. When all was said and done O.C. Coastkeeper planted almost 1,300 square meters of eelgrass in Upper Newport Bay.

Volunteer divers first harvested eelgrass from Newport Harbor during the morning hours and brought them to Back Bay Science Center. Once brought ashore a group of land-based volunteers untangled blades and organized them in slates.

Divers then took the slates to a select portion of Upper Newport Bay and planted a bed of eelgrass underwater. Each planting session was completed within 90 minutes.

At the time of planting each blade of eelgrass is about the length of one’s forearm. Over time the blades would grow to be much larger.

Eelgrass is a valuable underwater commodity, providing shelter for marine life and enhancing seafloor stability, according to the Newport Bay Conservancy. The flowering plant, through photosynthesis, specifically provides oxygen for various species of fish and invertebrates (such as bass, halibut and lobster) and protects against coastal erosion.

“Eelgrass also helps prevent erosion and maintain shoreline stability by anchoring seafloor sediment with its spreading roots and rhizomes. Its leaves, floating in the water column, slow water flow, which promotes deposition of suspended particles and stabilization of sediments,” an MIT report on the importance of eelgrass stated, adding the plant also serves as a filter of water pollutants.

Coastal erosion is also minimized with the presence of eelgrass.

“Eelgrass is desirable for nearshore restoration, due to its ability to stabilize sediments and reduce erosion. Seagrass restoration is also a tool for improving water quality and providing habitat for various aquatic and coastal species,” a USDA fact sheet stated about eelgrass.

Poor water quality has caused eelgrass populations to be in decline in the last 40-some years, according to the USDA.