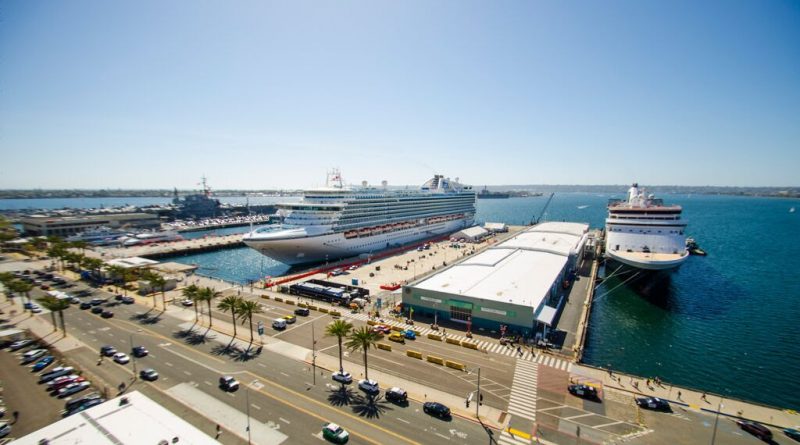 The Port of San Diego announced that they were planning to double the shore power capability at two of its cruise ship terminals.

SAN DIEGO一 The Port of San Diego is doubling its shore power capability at its B Street and Broadway Pier cruise ship terminals.

The port just approved $4.6 million in funding for the project, which includes several agreements for equipment purchasing, construction, and installment of the additional shore power equipment.

The project will provide standing shore power to two cruise ship terminals allowing cruise ships to ‘plugin’ and run-on electric power and turn off their diesel generators which allows the cruise ships to lower their carbon emissions.

The project is part of the port’s commitment to comply with the recently updated California Air Resources Board regulations, requiring cruise ships using California ports to use shore power by Jan. 2021, and is part of a larger maritime clean air strategy.

Dan Malcom, port commissioner for the Port of San Diego, said that by providing shore power outlets the port will see at least a 90 percent reduction in harmful pollutants.

“[The port has] been planning this improvement for a long time,” said Malcom. “We have put that money aside… we have gone out and looked for grants, and at the end of the day we are financing this through our money through operations. It shows our commitment to the community and to clean air, we are committed to being environmentally sensitive and enhancing our commerce.”

The port initially used shore power in 2010, they were one of the first ports to do so in California according to Malcom. At the time the port beat the state regulation to reduce diesel particulate emissions from at least 50 percent of cruise calls by nearly four years.

Malcolm said what they are doing now is providing clean electric power on the docks.

Malcom calls the project a “win-win” because of the economic benefit of cruise ships in the port and the environmental benefit of the project.

Malcom said that the cruise ship industry has an almost $2 million benefit to the region from the influx of tourists who are flying in, exploring the area, and pumping money into the economy. Malcolm also said that the port is dedicated to facilitating the maritime business in an environmentally friendly fashion.

The project is just one of the port’s initiatives, the port is expecting to install two shore power outlets to the National City Marine Terminal by 2025, and additional shore power to the Tenth avenue terminal by 2031.

Malcolm said that the port is in the planning process for the B Street and Broadway terminals and expects that the project will be complete by Sept. 2022, give or take six months depending on permitting and the building out process.