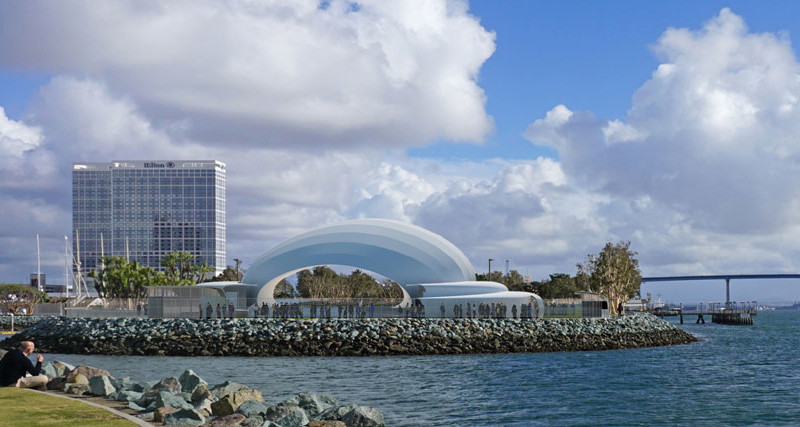 SAN DIEGO — Boaters in San Diego Bay might be able to drop anchor near Embarcadero Marina Park South and enjoy a live concert.

The Port of San Diego will look into building a permanent performance center for the San Diego Symphony Orchestra Association at a park adjacent to Marriott Marquis Marina. The park itself is attached to a marina. Performances could be accessible by boaters on the water.

“The location on the bay is a premium, and we need to create a premium experience,” said Symphony Orchestra Association CEO Martha Gilmer, who added the planned concert hall would attempt to offer year round events.

The new concert hall would bring up to $1.7 million in revenues within the first two years of operation, yielding the port district $226,700 in rent, according to port staff’s calculations. First-year revenues are estimated to be $1.1 million; the port would receive $115,200 in initial rent.

Symphony members and programmers would ramp up concerts and additional events during the first two years of the venue’s permanent existence.

“The increased revenues and rent are based on the symphony’s ability to present and promote more high-caliber artists and concerts that command higher ticket prices, increased demand, and food and beverage sales associated with the completion of the project,” port staff stated in a report to commissioners.

Audiences enjoyed 37 performances by the Symphony Orchestra Association in 2015, resulting in the port district receiving $81,275 in rent for a temporary venue. The association was held responsible for lawn maintenance, irrigation system damages and utilities’ costs.

The Symphony Orchestra Association has used Embarcadero Marina Park South as a temporary concert venue since 2004. Symphony members and staff assembled what port staff described was a “music festival” type of stage complemented with bleachers, temporary seating, ticket booths, concession stands, food stands, restrooms and other infrastructure elements at the beginning of each season.

Building a permanent venue would provide the Symphony Orchestra Association with established infrastructure.

Construction could start in October and take nine months to complete; work will not start on the project until environmental and California Coastal Commission review is complete.

The stage would be designed to limit the travel of sound across the bay and into Coronado. How the design would limit sound travel at closer range has not yet been determined.

Commissioner Ann Moore said a concert hall for the Symphony Orchestra Association fosters the port’s goal to introduce a mix of uses in Downtown San Diego and the harbor.

San Diego Mayor Kevin Faulconer added the port’s pursuit of a concert hall on the Embarcadero enhances the public’s access to the waterfront.

“I think it’s going to be one of the most remarkable places people will visit,” Faulconer said.

The port and symphony must conduct an environmental analysis before moving forward with plans.

The Symphony Orchestra Association has not yet developed a business plan nor has it proposed economic terms, port staff stated.