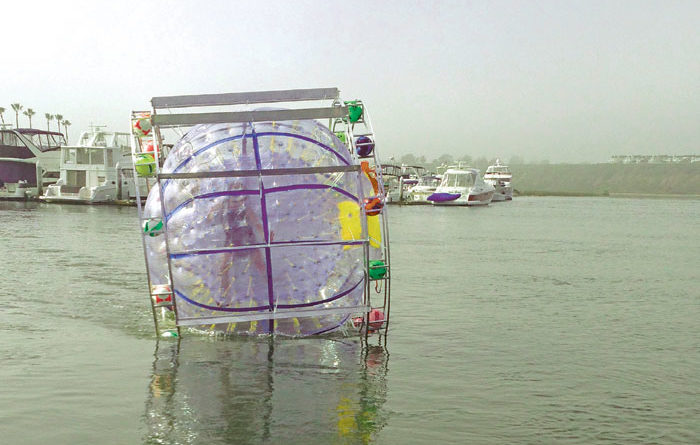 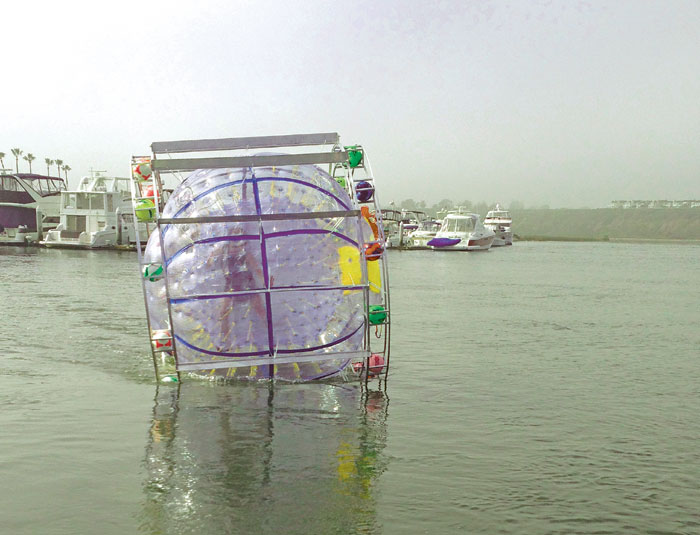 REDONDO BEACH — An Orange County resident’s attempt to “run” across the Catalina Channel from Redondo Beach to Santa Catalina Island in a giant inflatable bubble came to an abrupt stop April 12, about four hours into the trip, when the breathing system designed to provide him with fresh air failed.

“It didn’t work out,” said Reza Baluchi, who had to stop his run midway — much to his displeasure.

Baluchi engineered the Zorb ball’s unique mask to feed him fresh air as he moved across the water, with his body movement. However, that motion ultimately caused the air line to cut off the air supply to him inside the ball.

He climbed into his man-made bubble at 6 a.m. at Moonstone Park in Redondo Beach. He ran for several hours before coming aboard a support boat skippered by John Sakacs, executive director of the nonprofit organization City2 Sea.

Sakacs volunteered the City2 Sea boat after hearing about Baluchi’s endeavor to make it to the island in 12 hours and then run back the next morning, in 10 hours.

Baluchi’s run to and from the island is designed to support his nonprofit organization — Plant Unity — and its mission to raise awareness for world peace and to create educational opportunities for children around the world.

“I was inspired by his mission,” said Sakacs, who intends to be there when Baluchi tries the journey again.

Despite the setback, Baluchi still hopes to become the first man to run from the Southern California mainland to Catalina Island, and back. His crew of designers and engineers are currently working on installing a ventilation system on the Zorb that will allow him to accomplish his goal.

“I never give up,” Baluchi said. “I will have a better version of what I am doing.”

He also has aspirations to run to the Hawaiian Islands to raise money for City2 Sea. The native of Iran, who left the country in 1996 after having been imprisoned for 18 months for “associating with counter-revolutionaries,” spent seven years biking across 55 countries on six continents and covered more than 49,700 miles.

The next trip to Catalina is expected to take place in May.